What made the difference between Good Things and other revivalist initiatives of the same kind, was Aloe Blacc's ability to update a well-known formula in an almost imperceptible way. It was, also, his superior feeling for music, which he developed by learning to play "real" instruments. It was thanks to these, and many other details, that Aloe proved that nu soul could be, at times, something much better than a tasteless old recipe for aging folks. 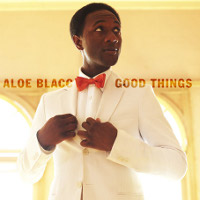 What does a rapper do, when he gets old? Blues, like the rockers of the old times? No sir, he does funk.

This is how began an old review of us, dedicated to an album of Lyrics Born, an old friend. Replace "funk" by any other genre belonging to the great black music tradition, jazz, soul or reggae, and this will still be true. It was true for the Quannum's rapper, and it is true as well, not too far from him, in the same West Coast Underground rap scene, for Aloe Blacc.

For two albums now, Emanon's rapper has evolved toward late 60's / early 70's classy soul music. And not by mixing rap with a few sounds coming from that era. No, he really sings, like people did at this time. There is a significant difference with other nu-soul singers, though, since there, it really works. Aloe is even infinitely more fascinating with his latest album, a record he modestly titled Good Things, than he ever was with Emanon.

Chance had begun to turn for Aloe Blacc when the song "I Need a Dollar" featured in the US serial How to Make It in America. The melody was catchy, appealing, and it announced what would be his record's main characteristic: despite its luxuriant music, above these rich horns, organs, wah-wah guitars - look at the very blaxploitation sounding "Hey Brother" - offered by Truth & Soul Production, Aloe Blacc was reporting the difficulties of our times, he was talking about today's crisis America and its 10% unemployment rate.

Other tracks than "I Need a Dollar" were exploring the same topic, for example "Life So Hard". Social commentaries, though, could sometimes leave space to love songs dedicated to women ("You Make Me Smile") or mummies ("Mama Hold My Hand"), and more optimistic messages, like the Stevie Wonder sounding "Green Lights".

Also, "I Need a Dollar" was far from being the best track on Good Things. The album contained other masterpieces, like a cover of "Femme Fatale", so well appropriated by Aloe Blacc that he gave the feeling this venenous Velvet Underground song had always been a black music standard. The most irresistible moment, though, was "Miss Fortune", a story of his missed appointment with chance, which flirted deliciously with reggae music.

What separated Good Things from other revivalist projects was also a strong ability for refreshing the old soul formula, like with the hectic drum of "Loving You Is Killing Me". It was also its superior musical sensibility, characteristic of rappers who are able to play "real" instruments, Aloe Blacc having studied trumpet, guitar and piano in his younger years. It was these, and multiple other details, which made of Good Things an outstanding album.