Last year, soso started getting some attention from music critics. His last album, Tenth Street & Clarence, received some praise from people usually not too familiar with Clothes Horse Records. So it was perfect timing that now, in 2006, Japan's Hue Records decided to rerelease Birthday Songs, the Canadian's best album so far. As usual with its releases, the label didn't publish the record as such, but with a new packaging, including some notes in Japanese, and lyrics in both languages. The rapper contributed as well. He drew the dog on the cover art, to replace the birthday cake of the previous version. And he corrected or added a few tracks. 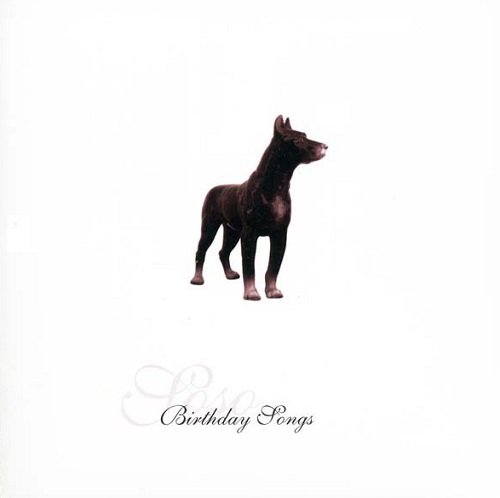 The record, however, is more or less still the same as 4 years ago. The music is made essentially of slow and sad raps again, the same that had reached their apex with the first version. The beats still have a folk music feeling, with their guitars and pianos – plus a few synthesizers – and samples of the same kind, for example some words from Leonard Cohen's "Queen Victoria" at the beginning of "Pretty Mound of Dirt". Soso only added sounds to the beautiful piano on "Birthday Song".

Actually, the only real shift is with "Dyke Look". In the past, soso had admitted his disdain for this track, where he says that he has the look of a lesbian, and which has nothing to do with the ambiance and lyrics of the record. However, it is still here, and soso's whiny voice is even more removed from the subject matter, than his more neutral tone on the old version. This update is not welcome. Fortunately, though, soso chose not to alter the raw and austere sound of the other tracks.

Elsewhere on Birthday Songs, almost nothing has changed, apart from an improvement, which is making the record even more essential than before: soso and his Japanese pals added two very good songs: "Anger In the Land" is one of the languorous instrumental tracks the Canadian is particularly good at; and "The First of a Thousand Goodbye" talks again about death, a recurring theme with soso, which is also the central topic of "For Ruby", dedicated to his aunt, who died of cancer – as a matter of fact, the porcelain dogs on the cover art are hers.

Supported again by a beautiful and sober piano, the rapper says there how difficult it is to lose and grieve someone, and it is just splendid. This track, and the other new ones, are enriching soso's short and almost flawless album. Thanks to them, Birthday Songs is more than ever the rapper and producer's strongest album, in addition to one of the oddest rap record ever made. It was an indispensable sample of mutant hip-hop in 2002. And it is still the case in 2006, and beyond.