We can’t stop these men. After launching the Cavemen Speak, Stacs of Stamina and Gunporn projects, Siaz from Belgium and Marcus Graap from Sweden teamed up again under the Zucchini Drive name. Together, they released the Being Kurtwood album, one of the nicest hip hop records for the beginning of this year. Their concert with Bleubird last winter in Paris at La Guinguette Pirate was a first opportunity for us to meet personally this European counterpart of our beloved North American indie rappers. 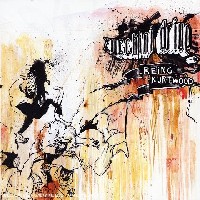 As far as I know, you’re not from the same country. How have you met?

M: we met in Belgium

S: Marcus was living in Paris.

S: a very old Cavemen Speak album. He came to Belgium to play shows and we recorded one song for the Cavemen Speak album. That’s how we started to record. This time we did the Zucchini Drive album a bit more properly. We worked a year on songs, sending emails, gathering beats.

So you did not work in the same studio?

S: most of the songs have been recorded in the same place. We used the time we were separate to write, to arrange songs and to select beats we both agreed on. And then we recorded together. There’s no point recording in separate studios.

M: we had to be in the same place to record this album.

S: we tried to push the variety a little bit more. We wanted the album to be very diverse. One song had to be very different from another. We wanted to change things. That’s why we had to be together, we couldn’t do it separately.

You have lots of prestigious guests on your album. How have you connected with them?

S: always a different story. We met a lot of people through shows.

M: yes. We met Bleubird at a show in Paris 3 years ago and then we did the Gunporn album.

S: we met Grand Buffet at the same show.

M: and we did a tour last year with Grand Buffet as well.

S: I met Alias at a show as well. All these guys are really connected through shows. And there are also the albums we are listening at the moment. We always try to push our sound in the direction we’re listening to and we are living. We try to use the beats that are more accurate at that moment.

M: and we didn’t want Zucchini Drive to sound like Gunporn. We always try to new stuff.

S: the thing is that Marcus and me would like to do different stuff from the own bands we have, Cavemen Speak or Stacs of Stamina. We try to push ourselves into a new direction. Otherwise, there’s no point doing a new project apart from our own bands.

Are Cavemen Speak and Shadow Animals the same band?

S: I started with a website named Shadow Animals to promote, so that we don’t have to work always under the same name. I wanted to do other stuff next to Cavemen Speak. Shadow Animals was a way to work with different people under one name.

S: yes, that’s a little bit like the Wu-Tang Clan.

Stacs of Stamina released an album last year. I haven’t listened to it so far, but I’ve read positive reviews.

M: it took 3 years to put this album together. We recorded songs for the album but we always considered they were not good enough and had to restart them over. It just came out in November last year. It did it pretty well. We haven’t done too many shows. We’ve done something like two shows after the record came up, one in Paris and one in Berlin. The record was released by a very small London based label. And…

M: we still want to do a tour to push it a little bit more.

S: one day Marcus, one day.

What about the feedback you had about the Gunporn album?

S: it was very good. It’s weird, we haven’t sold so many copies of it, but it seems just like everybody knows about it. A couple of months ago, the guy who owns our label, who’s in a hardcore band, was with another guy, a Japanese guy. He saw the record and he was impressed. He said something like “wow, do you have something to do with Gunporn”? It was weird that this guy even knew the name of Gunporn.

He got the album from a peer-to-peer software.

I have the feeling that you’re becoming more and more famous.

M: we’re not trying to do anything to become more famous. We just do what we feel at the moment.

S: when I try to promote a record, I still try to do the same thing as three years back. And with time, you get more and more addresses, you get more contacts and you start to build a network. It goes very easy right now. But it’s been 5 years of hard work.

What about your tour right now?

S: yeah, to have a bit of fun. I’m actually on my yearly holidays. I’ve been working for the whole year so I deserve it.

I had a feedback about your show in Rennes. How was it?

S: to be honest, it was one of our first Zucchini Drive shows. So it was a bit messy. We had to adjust to the new situation and play with the drum machine.

M: we never had a live set-up, as far as Zucchini Drive is concerned. It was pretty new. It’s so much better to play with a live set-up.

What about your forthcoming projects?

S: I’m trying to push Zucchini Drive as far as I can right now. So I don’t really care about what’s going to happen in the future. I’ve already a lot of beats ready for a next Zucchini Drive album. But that’s for the future. I have also this album with a guy from a post rock band named Giardini di Miro out of Italy. We’ll record a kind of post hop album. It’s going to be different. Otherwise I want to work on new Zucchini Drive stuff.

M: I have a mixtape coming out in a month. And we recorded a song with One-Two from Paris last night, a killer song, a pretty good one.

S: we keep on working. We keep on doing shows right now. We just had a record out. So we’re fine for a couple of months. We’ve been working too fast the last couple years. But this time we want to work on this record properly. This tour is perfect to have new ideas together and take the time to prepare new stuff.

M: we’re talking about a new Gunporn album in the future.

S: maybe, maybe not. We’ve been talking about it for a while, but we need to have time together.

Shadow Animals is a label as well, isn’t?

S: yes. It’s called Shadow Archive. It’s actually friends of ours who put out stuff for us. But now we try to work with different labels. We’re in touch with a Japanese label which has released our old stuff. It does a really really really good job. They sell triple of what we sell.

S: yeah. I love Japan. They are very professional.

Bleubird told me they even translated his lyrics in Japanese.

S: it’s always cool to get a box at home and see your CDs that have been released in Japan, with magazines, reviews, postcards, pictures of the stores where they are sold. It’s crazy.

Have you ever been there?

S: but we want to go there in Fall. We’ve been talking about it with the label. And now they are checking out what they can do. They’re not used to working on shows and stuff like that.

M: but I’ll go there anyway.

Well. And what about your final message to France and to Paris?

M: we’re coming for you!