P-Love is quite a good DJ and beatmaker, but he's not that famous yet. The 27th of october, we took the opportunity of his show at Mains d'Oeuvres in Paris' suburbs to ask him some questions about his background and career and to talk about Bully Records, Kid Koala, Q-Bert, The Smiths and classical trumpet. 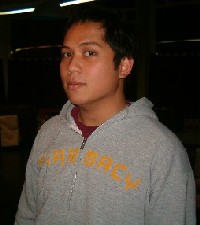 I first heard about you through Bully Records. So my first question is how you started with them?

It's really easy. Before Bully Records even started, Marco – who's is the guy who runs Bully Records – used to manage this record store in Montreal named Disquivel. I worked there for a summer because I wasn't doing any tours. And he told me he was starting a label. At that time he was about to release his first singles, He Did Glass Music and so on. And I was also recording with Sixtoo for the Villain Accelerate Record.

You participated to the Villain Accelerate album?

Yes, I did some scratch. Marco and Robert (Sixtoo) were very good friends and he asked me : "do you want to do one 7'"? I said "OK, we'll do that one". And then it kind of went from there.

You also have connections with Kid Koala.

What's the story of it?

With that it's different. That goes as far back as 1997. The DJ scene is very small in Montreal so everyone knows each other. I guess we had known each other just by being in the DJ scene. And I think he was friend with some of my sister's friends. When we did run into each other it was just because it turned out that we lived one street from each other, in the same neighborhood : "ah you're a DJ, we should jam". It was around the time when he was signed to Ninja Tune. He wasn't around a lot but when he came home we would jam or whatever. When he released his first record, he asked me to help out with some of the turntable stuff. And we still work together.

You're telling me that Montreal's DJ scene is very small, but I have the feeling it's changing.

Yes, but not necessarily DJs. When I'm talking about the DJ scene, it's more about the scratch DJ scene. It's bigger now, but the mentality hasn't changed. It's still a small scene, people are still friends. And when it comes to the scratch DJ scene, it's still very small. There's no animosity between people. It's different in New York. Everyone is a DJ there, you always have to try to be bigger to this person. There's a lot of shit talking going on.

Originally, you're from New York.

Why have you left?

My sister and I both went to university in Montreal. Just because it was only six hours away. And by the time I was 18 I was so sick of New York. I wanted to go far away, but not too far from my parents.

Do you still have connections with DJs in New York?

Well, yes, with some of them. Some of the scratch DJs there. I went to High School with the guy that runs Tables Magazine. We used to jam together. Now, whenever I go to New York I mainly see my family and some friends there.

You also have another musical experience. You are a classical trumpeter.

It was before deejaying, before doing beats. When I was 6 years old I began to play the piano, I took 12 or 13 years of classical lessons. I also started to play trumpet not so much after. The original plan when I grew up was to play trumpet in an orchestra and to travel with it. I didn't have too much of the jazz training until I was older. But when I went to high school I started playing turntables.

Your album starts with a trumpet. You're the one who plays it?

Yes. It was really important to me, I wanted to keep that. The album have so many reference points. I wanted to have that kind of note. That's my roots, piano and trumpet. Even if I don't play trumpet on the rest of the record I wanted to start with that.

Have you played other instruments on it?

Yeah. Most of the instruments like trumpet, guitar, piano, other keyboards, the thing call the stylophone and some of the drum programming. And then some friends came.

I've heard that your album is being released by Ninja Tune as well.

It's being distributed by Ninja Tune in Europe. Ninja Tune has been really helpful. Up to that point, Bully had only released 7', Ninja Tune helped us to reach out a larger audience.

I read in your biography that you were part of a The Smiths cover group. That is very interesting since I work for a webzine that's into indie pop music.

(laughs). Yes, this was when I was in High School. I was not obsessed by The Smiths, I was more into stuff like The Pixies and so on. It was my first experience outside of an orchestra, playing guitar while my dad was singing in a church choir. It was the first thing that I chose to do musically. I even don't know why I mentioned this. It was significant because it was my first band with nobody telling me what I should do. It became my first independent musical move.

How have you started deejaying?

I started deejaying in 1993. It was really simple as my friends were DJs. I grew up in a large Philippino community in New York and this was one of the things to do when you were a Philippino. It was either you played basket ball or you did that (laughs). And I can't play basket ball or any other sport. Immediately I started to see parallels with deejaying and playing music. People would say that deejaying was not real music : fuck you, this is real music! I started out matching beats and to see the importance of learning, for example making things sound right together. You can make any two things with the same bpm but sometimes it won't just sound rights because you have two different keys that don't match together, and it sounds like crap. I started to see the importance of that. I wasn't really into deejaying first because I was too busy practicing trumpet, but I always would go to parties. I helped my friends and one of them told me "you should get into deejaying because you know music and understand it".

Do you think practicing classical music was profitable from the DJ point of view?

Yeah! Totally. It was not something that I realized right away. I couldn't use all of my theory experience to become a better DJ. It happened latter when I was studying jazz trumpet at university and at that time doing DJ battles. But I'm also learning from deejaying by watching Q-Bert videos. Then I can mix the two of them. That's when I started to mix a lot of Miles Davis solos and this kind of stuff. I tried to repeat all the feeling and nuances of my trumpet playing. To answer your question, it was totally profitable.

You told me that deejaying was big in the philippino community. That's true as well on the West Coast. Why?

I don't know. There's actually a book about it and the philippino DJ scene in the Bay Area. I don't know how it happened. Maybe because they do a lot of parties and have to hire DJs (laughs). There are also a lot of Philippinos who can't play basket ball and don't have money to spend on their cars, so they start deejaying (laughs).

What about the tour you're doing now in France and Switzerland?

It's just started! I don't know how it's going to go. This is the first show in Paris.

And in the past time? Have you ever been in Europe?

I did some tours with Kid Koala before. I did like 3 European tours in one year, it was crazy. This is the first time that I've been in Paris and actually got to stick around. All of the time I've been in Paris before was only for one day. I could only see the venue. I actually went to the Louvre yesterday and took pictures (laughs).

A lot of people say that the European and North-American publics are completely different.

They are. But it depends on each country. Even in North-America, it depends on the city. The crowd in Alabama would be completely different from the Los Angeles show.

You've just released your album. Do you have any other project?

Matt Kelly and I are going to do another EP for Bully. I will surely do a couple more 7'. And then sometimes I'll have to start another album. But I have to find the time for it because I was given a very big tour schedule for the following months to try to promote this album.

Have your any special message to end the interview?

Please come to our shows (laughs).