Illustrated is made of the same wood as Schemata, the very good album thanks to which we discovered Toolshed, in 2002. It is also of the same ilk as the previous album, an untitled one, they released in 2000. And maybe, it is similar to the group's other recordings, now untraceable. Timbuktu (MC, producer), Choke and Psyborg (MCs), B Swizzle (DJ), Danny Miles (percussionist), Andrew McCormick (bassist) and Pat Giles (guitarist) are not trying to change their recipe and flavor. 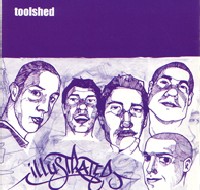 They are doing just the opposite. They are proceeding with the energetic kind of rap they are so good at. They are more at ease than ever with their live-sounding beats, their dynamic lyrics and this music which, to oversimplify, looks like a mix between The Roots and The Shape Shifters. So they are persevering.

Talking about the Shifters, one of them, Awol One, is guest appearing on this record. And Oldominion's Sleep as well. Thesis from Bending Mouth is also there, as with the previous album – a bit less surprising, since this guy is coming from the same place of Canada as they do. Mcenroe, this workaholic, is helping them as well with the record's mastering. The main players of Toolshed, however, are never eclipsed by these heroes or semi-heroes of the hip-hop indie scene.

As with Schemata, most of the interest is guaranteed by the band's quick raps and the many instruments on the record. All of these are defying the usual loops and routines of hip-hop. There are so many that we never know if they are sampled or played live. Organs, pianos ("Earmuphs", "Mystery Shot"), basses ("Crawls Space") and contrabasses, guitars ("Breakthroughs"), flutes ("Happiness"), trumpets (the great " Suntinesoom "), saxophones ("What do you Think") are colliding on Illustrated, with the same success as with the previous records.

For Toolshed, this very convincing fourth album is a new step in an almost flawless career, a more and more fructuous and exciting one. Let's just hope now that this band of Canadians gets better exposed over time. It deserves a better coverage.