Released one year after the great Dirty Deeds and Dead Flowers (2003), Existereo's new album is made of the same wood. Like it, Crush Groove is full of guests, styles, and very eclectic beats. It looks like some crowded compilation; especially since it includes tracks already released on previous records 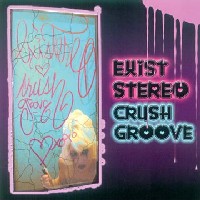 Beyond the great "Rhyme Time", which is remixed in a more relax and less bombastic way than the original version, the jazzy "Eyeball" is recycled here, which already featured on Deeskee's Blacklight Sessions, as well as "All About the Rhyme", which was on The (English) League's last album. On this record, also, Existereo shows his greatest strength: his ability to propose some lightened and simplified version of the Shape Shifters' formula, a more accessible one.

As always with this collection of incredibly creative Californian rappers, we are proposed a festival of raps and sounds. Existereo plays the crooner on "Above the Sea", he lists his imaginary fans on some very bouncy beat with "Who you Rockin' For", he raps at very high speed on the "Cautious Thunder" crescendo, he is using some electronic sounds typical of the beatmaker Subtitle on "Work Related"...

This is some pure Shape Shifters delirium, but with a strong capacity for building real songs and true bangers, and without the never-ending litanies typical of the group, and more particularly Circus. This high accessibility may not be enough to classify Crush Groove as a Shape Shifters masterpiece. But for sure, for neophyte, it is one of the best and easiest entry points to the music of this strange crew.