There are several news concerning Recyclone in 2005 : re-release of his Dead World and Corroding the Cellular Engine albums, preparation of a new record with Soso from Clothes Horse Records, collaboration with Second Front... It was time for us to interview this key player of Canada's hip hop scene and discuss with him about his past and current projects, his career as a rapper or a rocker and some other issues. 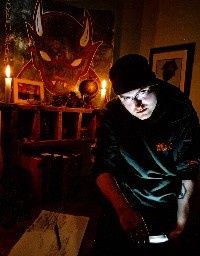 Can you shortly tell people who still don’t know you who Recyclone is?

Recyclone is the reaction to the times. I use Recyclone to express my frustrations with myself and my fellow human beings.

I was raised in the country. By grade 10, I knew I had to leave someday. I was drawn to the city and all its mysteries. Once I got there, the shroud was quickly discarded and the harsh truth of the city was revealed. The air was polluted with the smell of burning carcasses from the rendering plant. I was woken from my sleep by trains passing late in the night,shaking my house. I worked the back shift at a corner store and witnessed the underbelly of humankind. After reading doom soon theories about the end of the world, I started building an urban suit of armour. I felt that I was the only one awake in a world of sleep walkers. I tried to be very calculated in my daily routine. I admired the machine for its never ending ability to work without end. But I was not a machine and I broke down. I have feelings. I make mistakes. I am not perfect.

This interview being prepared for a magazine that is more into rock than hip hop, can you tell us about your past as a drummer and a member of rock bands?

When my oldest brother brought home some Led Zeppelin, Van Halen, Iron Maiden and Judas Priest records in 1986 I knew that I wanted to be a drummer. So, I begged my parents to buy me a drum kit and have been playing ever since. My first band, “the Motes”was an indi-rock band formed out of depression and isolation. The two founding members were J. LaPointe and myself who were from Truro, a strange little industrial farming town in central Nova Scotia, Canada. My second band was a Hard Core band called “Equation of State”. It was formed in Halifax, Nova Scotia in 1997 by local musicians who wanted to have a bit more edge and political drive in their music. I broke from the band in late 1999 do to the tight restrictions that I found myself to be trapped in do to the musical genre. Hard Core band equals Hard Core music. I missed the musical freedom that the Motes had so I decided to try and find that once again. I eventually started working with my friend Matt Ried and was a part of his band called Death By Nostalgia. For the past four years I’ve been making music again with J. LaPointe, we call our selves “Instruments”. It’s so wonderful to make music with your best friend. J and I go way back to high school and to have that history and understanding between us is wonderful. This very unique and I feel very lucky. We have a cd out and plan to tour in the near future : www.instrumentslab.com

Since I’m a drummer, I have always loved the power of rhythm. That is why Hip Hop caught my attention. Though Heavy Metal is my first love, I would say that Hip Hop is my second. I Mostly listen to Metal these days but I create Hip Hop. The reason being is that I feel is the simple fact that rhythm lives inside of me and the best was for me to express that is through Hip Hop. I was making Hip Hop before I even knew what it was. I don’t think that I could make the same music that I’m listening to. I would probably get really board very quickly.

How have you switched to hip hop?

I have always been recording solo stuff and one day while working on an album with help from Rob Squire (Sixtoo) he asked me, “why not just put out a Hip Hop album?” So, in 1997 we started to work on the first Recyclone album. I was going to photography school in Halifax at the time and on the weekends I’d jump on a bus and go to Truro. I would bring him some records to sample and he’d make some beats and then we’d go into the studio and record a song or three. I’ve been making Recyclone albums ever since.

What kind of music do you listen to nowadays? I read another interview of you mentioning hard rock...

What’s the story behind the re-release of Dead World and Corroding the Cellular Engine? What is a continuous request from the few fans of the two cassette releases or your own wish to give a new chance of under-estimated releases?

Since my first two albums were never made public I though I’d toss the idea of releasing them on one cd with bonus tracks at this guy who I was working with, named Troy from Saskatoon, Saskatchewan, Canada. He was making beats and I was writing rhymes for a collaborative project to be released on his label, Clothes Horse Records. So I though that he might be interested in putting it out on his label. He was and so it is now available for anyone who wants to listen.

How have you met Soso and his friends?

I hooked up with Soso through my friend Pipi Skid. Pipi told me that he knew a guy named Troy who wanted to make beats for him. The album that Troy/Soso and I are working on was supposed to be with Pipi Skid, as well. But Pipi moved and I continued to work on the project.

Will this forthcoming release with Soso be harsh, industrial and nihilist like your previous releases or will there be a significant change of style?

Soso’s beats are very slow. At first I wasn’t sure if I could rhyme over them. I took it as a challenge to refine my flow and my ability to meld my voice and words to any type of beat. It’s quite different than my past stuff but it’s still Recyclone. The album is set for release late August, early September, 2005. It’s the kind of album that you’d listen to on rainy days and cold, sleepless nights.

Will you rap while Soso produces the record or will the collaboration be a bit more complex?

Mostly he makes the beats and I write the lyrics and rhyme over his music. I still make suggestions on how the song feels if I think that it gets too silly, for example. But for the most part; Soso; beats. Recyclone; words.

You also mentioned a forthcoming collaboration with Second Front and shared stage with them. Who are they? What kind of music do they do?

Second Front are a five piece, Political Hip Hop group from Halifax. Most of the members are from Truro, NS. They asked me to drop a verse on one of their songs for their full length debut album, I’ve been working with them ever since. They’re on a song on the new Recyclone album with Soso. Andrew Gordon MacPherson who is the main producer for Second Front is actually producing my next album. He also is my DJ at live shows and he has a 7" coming out on Bully records (Sixtoo’s label) in the late fall. I am working on an album with one of the MC’s of Second Front, Erik MacIntyer/EMC on two new projects. One will be a Halifax based project featuring local political MC’s. The other is going to be a lighter project called “Moon Bark #13" where EMC and I make all the beats and rhyme about going to the grocery store and such.

What’s your retrospective feeling about the hype about the Halifax hip hop scene that happened a few years ago? Has it changed anything for you?

When Sixtoo and Stinkin’ Rich/Buck 65 were living in Halifax, Hip Hop here was fresh and interesting. People loved the odd-ball approach to Hip Hop. People weren’t afraid to be different and try different things. That goes for the MC’s and fans alike. Now MC’s are more into party raps and getting drunk. There seems to be too many narrow minded people making music theses days. So, I moved to Dartmouth, which is across the harbor from Halifax and do my own thing without worry.

Is the Halifax scene still alive, creative and innovative?

Can you tell us more about the very harsh song you made about Halifax on your Numbers album? What was your intention with it?

I was just sick and tired of the people in Halifax that just seamed to feed off of one another instead doing their own thing. I worked the graveyard shift at a convenience store and saw the underbelly of Halifax and it just made me sick. I had to get out or go insane, so I did. I moved to the country for a year and wrote Numbers while working the back shift at a grocery store.

Some of your fellows such as Buck 65, Sixtoo and Josh Martinez have become rather famous while some others such as you or Knowself have stayed in the Underground. Any regret about that?

Not at all. I will always make music, no matter if I’m the only person hearing it or if the world has access to it.

Sixtoo did the production on Dead World. Are you still in touch with him since he live in Quebec?

Yes. We may only talk on the phone about twice a year but we’re still tight. We both live such busy lives it’s hard to keep in touch especially with the physical distance between us. We use to talk about collaborating on another project. This time we’d both be rhyming and making the music. Who knows. He just asked my band Instruments to open up for him on a future tour. Everything is just in the talking stages, who knows what the future will hold?

So, you are still located in Nova Scotia?

Any plan of venue to France and Europe for Recyclone?

I’ve been asked by Sole to re-release Numbers on his record label, 6months, so, if that goes through, a tour of Europe would be in order.

Any final statement or message to France?

Always make music and art for yourself no matter what the cost. Stay strong and remember that we can battle this sickness called life together.

Thank you for your time.