This man is the new Michael Jackson. He is the American Dream. Well, this is at least what Jimmy Greek is pretending. Full of self-confidence, he is saying so on the bombastic "Tea Party for Michael", and then on "Dusty Rhodes", two tracks of a new record where he is aiming at the same notoriety as Scott Baio's. Scott who? Scott Baio, the Happy Days actor, the very guy displayed on the cover art. 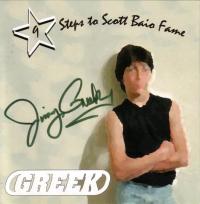 This MC from Philadelphia, in fact just a mailman, and a key member of the Jam Faction collective, hasn't reached this ambitious stage yet. But he has the potential for it. The 9 tracks of 9 Steps to Scott Baio Fame prove it, concentrating in a short length all the talent Greek already showed on The Preferred Remedy, an album he released in 2002, and which deserved the attention already, with its strong punchlines and the rapper's funny sense of self-deprecation

Just imagine some exuberant and hysterical MC, or a mix of LoDeck, Thirstin Howl III and something else, indescribable. Then multiply this by 10 or 20, and you get something close from Jimmy Greek. An incorrigible loudmouth, he moves from paroxysmal ego-trips to some exalted battle style. An angry and revengeful loser, he settles an account with some unrequited love through hilarious punchlines, or a simulated telephone conversation ("Come to Me").

The beats, as with the previous album, are managed by Rummage. They are heavily influenced by Company Flow – just listen to "Bluggeoning Syrup" – and they fit the rapper's assaults and energy quite well. Each track is restricted to the minimum: a loop, just one, often maltreated and built on the most radical materials - here a heavy metal guitar ("Tea Party for Michael"), there a crazy synthesizer ("Blitzkrieg"), and somewhere else some beat Gangstarr fans will be familiar with ("Casualties"). This is enough, and it goes perfectly well with the stabbing lyrics Greek is sharing, on this short and playful album.