You're both a rapper and a producer. How have you started doing music? What's your background?

Well... like a lot of little kids, I loved my Dad's record collection. I knew all the artists and song titles -- I used to organize his tape collection on Sundays. 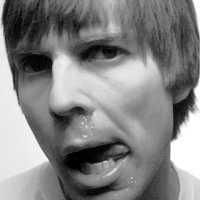 When I was like six years old, I'd play sick so I could stay home and listen to records -- I'd put these big earmuff headphones on, pull an afghan over my head and sing ‘Endless Love’ by Lionel Richie & Diana Ross...geez, maybe that's where I went soft, I never thought of that... But anyways, I think it was my utter love of beats that finally compelled me to try making my own. I started collecting records and in 1995 I got together some equipment .. I bought my first 1200's and an old radio shack mixer that must of been two feet wide. I started out mixing records and scratching. I got my hands on an akai s900 (which I still use today) and an old atari computer to sequence the beats. I worked with some a local mc, M.Phasis (anybody interested can check out one of our old tracks here www.offbeatproductions.ca/audio/mphasis_13.ram). It was a tremendous learning process. Eventually I grew disatisfied with the idea of being the silent/invisible member and started writing which led to performing and recording, etc.

Your hip hop can be qualified as personal, grave, gloomy and quite different from hip hop's usual imagery. Is this difference deliberate or has it come to you naturally, unconsciously?

I think powerful and sincere music is a product of some sort of urgency. The events/issues I address in my songs are important to me and I feel compelled to share these experiences with others. I need to say the things people won't say, talk about the things we would rather not address.

Have you met misunderstanding or hostility from traditional hip hop heads or critics?

It seems like the hip hop scene is maturing to the point where there's room for everybody. We don't all have to like the same thing, but we seem to have gained the capacity to respect each other's work. But I'd be lying if I said somebody hasn't dissed me on the internet or if a reviewer totally misinterpreted something.

Everything is based on my experiences and the experiences of those I'm close to. By writing about these personal issues, I hope to initiate some kind of conversation about things like abortion, racism, family history, etc. Hell, maybe someday I'll figure it all out.

You're not only a rapper and a producer. You also run a label. Is Clothes Horse just a mean for you to release yours and Epic's music, or have you more ambition concerning it (new artists, etc...)?

I'm slowly trying to develop the label into its own legitimate entity. There is so much good music that people need to hear -- I'd like to be a part of that. Recyclone is one of those people who I think everyone should hear. We've come to some sort of understanding and we'll be releasing a Recyclone project in 2003. I've also been working with a couple of artists on a new project that I don't want to jinx and we're pluggin away on Epic's new album. Hopefully there will be more good things to come!

Canada seems to be at the avant-garde of this new wave of independent hip hop. Would you agree with that?

I don't know... what do the emcees in Belgium sound like?

Is there really a hip hop scene in Saskatchewan or are Clothes Horse's the only rap artists there?

Saskatoon is a hip hop anomoly! I think our geographic isolation and small population has fostered a do-it-yourself kinda attitude. We've had to build the hip hop scene here from the ground up -- community radio, promoting our own shows, releasing mix tapes, etc. As a result, I think Saskatoon has one of the best informed audiences in the world. I mean, years ago, local promoters were flying in artists like Mystic Journeymen and Aceyalone and 2Mex and Awol for one night shows!! Ridiculous! We've also produced some talented artists, check out Factor, Time Invested (www.offbeatproductions.ca) or Muneshine's group, Lightheaded (www.mp3.com/lightheaded). Regina's hip hop scene is also bubbling up (check www.saskhiphop.com)

We're buddies from back when Peanuts & Corn were still in single digit releases! They're not only good musicians & rappers but really good guys to be friends with. We like to hang out when they're in town or if we see them in Winnipeg of whatever. They've helped us out a lot...

According to you, what has been the beginning or the trigger of Canadian hip hop, let's say in a Halifax or prairie Winnipeg/Saskatoon way?

I can't speak for all regions of Canada, but I think our experiences may be similar. What it comes down to is that hip hop artists want to create music that is unique to their experience, culture, values, sense of humour, etc. We are not satisfied to regurgitate what is essentially American music. I think we have been successful filtering this incredible music through our own experiences and producing fresh hip hop. I also think that in hip hop's formative years in Canada, the lack of a suffocating urban music industry (outside of Toronto) created a friendly, creative, less commercial atmosphere. If you're never gonna get signed and have no ambition of being signed it kinda liberates your music.

I can't imagine that you only listen to hip hop. What are your main influences or references inside and outside hip hop?

And what's your current playlist?

What do you know of French hip hop?

Hip hop is friggin nuts in Quebec... they've got their own french language hip hop industry goin on there. I must confess, I don't know anything about hip hop in France, that is, until I visited hiphopsection.com...

Does anybody think that Mr. Lif sounds like Special Ed (mid nineties?)