This is a well-established rule: any rap crew needs to have one feminine member. Such is the case with the Sailing Team, the collective led by Lil Yachty, who recently became an icon of Atlanta's new generation. Among his gang of happy guys with colored hairs, is a young lady, Kodie "Shane" Williams. Coming from a family of musicians – her half-sister used to belong to Blaque – she is not the least interesting of the band. She proved it last year, with a series of short projects like 2060, Little Rocket and Zero Gravity, and her defining song, "Sad". Having joined now Epic Records, thanks to Lil Yachty's post "Broccoli" notoriety, and benefiting from a growing media exposure, Kodie Shane recently proposed a new mixtape. 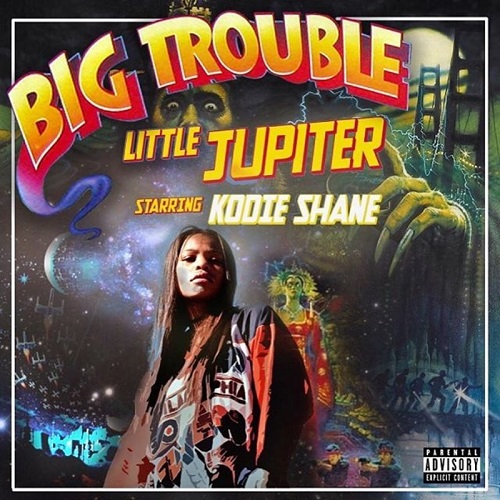 This project with a title inspired by science-fiction, like the previous ones – it refers to John Carpenter's movie Big Trouble in Little China – is a diverse and unclassifiable one. The ambiance, overall, is as expected with the Sailing Team : this teenage rapper is joyous, juvenile and exuberant. She has the same drug-infused foolishness of Atlanta figureheads like Migos and Young Thug, especially on the project's catchiest and most delirious track, "Like a Rockstar", with Saucy Longwe, or the sing-song and jerky raps of "NOLA". And elsewhere, with the sluggish but good "Twins", she says that she wants to walk in the footsteps of Jeezy, Jay-Z, Kanye and Meek Mill, with whom she is sharing feminine conquests.

Kodie Shane plays with the most contemporary sounds of rap, like trap music drum patterns, or the cloudy beat on "2 Minute". But Big Trouble Little Jupiter is also heavily influenced by the past, like with "Your Side", another duo with Saucy Longwe, which recycles En Vogue. In adequacy with another implicit rule with female rappers, Kodie Shane also does some R&B, especially by the end of the mixtape. Switching from one mood to another, she is either a communicative dilettante, or serious and introspective, even when her subject matter stays the same: her either masculine, or feminine, loves. Her versatility, as a matter of fact, is the main flaw of this short mixtape, which has a couple of gems nonetheless.