Being both singers and rappers, and able to play several kinds of instruments, the Ramos brothers can record anything that suits them. All over their careers, Ceschi and David experimented all genres of music, one could possibly think about: post-Project Blowed indie rap, of course, but also folk, Beatles-like pop, crossover hip-hop with Toca, some indie rock with Anonymous Inc., and even a bit of crunk, with the parodic and much entertaining Knuck Feast project, they released by 2007. 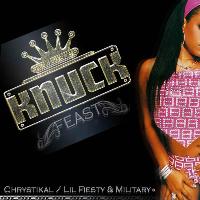 Crunk, indeed; populist Dirty South rap. And every bit of it, inclusive of raspy thug voices, sexist lyrics, rough synthesizer sounds, frantic and aggressive bounce rhythms, a club ambiance, warrior chants with a limited array of words - "you know we're nasty as fuck!" on "Nasty", "U ugly as fuck!" on the hilarious diss track "U Ugly" – and very explicit insanities mostly aimed at bitches - "I need a woman with a pussy that don't bleed no more", they say on "Suga Mama" - all declaimed on a screaming mode. In summary: this is the complete opposite of what Ceschi had offered, among other projects, on his 2006 album They Hate Francisco False.

Officially, Knuck Feast are two Georgia MCs, Crystikal and Lil' Fiesty, supported at times by Lil' Big (a.k.a. Big Lil', ah ah), Lil Leche, Rusty Fingercuffs and Big Nigga Naye – the listener will have to guess who hides behind each voice – and also the beatmakers DJ Young Cutz, Yoseph Una and Ghost Notes. And we could almost believe these were Southern rappers, except for their very fast flows and their sense of melody, two characteristics typical of the Ramos bros and their friends.

Can we really caricature a genre which, by nature, is a caricature, and an amplification of everything extreme in rap music? Judging by this record: yes, and no. Yes, it is possible to play with this formula, and to push it to its most absurd and humorous. And no, since at the end of the day, Knuck Feast demonstrates how much crunk can be sexy and powerful. Even when they are joking, the brothers make it: it is extremely delightful. Ironically, by overtly mocking the genre, Ceschi, David & co managed to release once of its most enjoyable records.