The CunninLynguists have been, in many ways, an exception. The duo – later on, a trio - had represented more or less the backpack rap tradition in a place, the Dirty South, where it scarcely existed. Also, in an anachronistic way, they have been loyal to some 90's and Dungeon Family inspired kind of hip-hop, at a time when Atlanta had moved to other subgenres, like crunk, or trap music. And curiously, by the mid-00's, with their third album, A Piece of Strange, they started meeting some success, at least on the critics side, exactly when their kind of rap had seemed rejected to the dustbin of history. As a matter of fact, by the end of the decade, the group was fully part of the hip-hop landscape; it could mix with people coming from other worlds than indie rap, and be a full part of the game by 2009, when mixtapes reached an unequaled status, when they were all the rage. 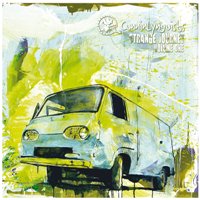 Strange Journey Volume One was the CunninLynguists' third mixtape, and the first of a new series of three. And it was an old-style one: it was a full mess, mixing new songs with old ones, recorded live in Stockholm like "Lynguistics", or remixed or rewritten, sometimes with additional rappers, like Dungeon Family's Killer Mike and Khujo Goodie on the great "Georgia", and Skinny DeVille and Fish Scales from Nappy Roots on "K.K.K.Y.". On some tracks, the CunninLynguists would rap with such guests, or with others, like indie rap figureheads Slug and Mac Lethal, or Sweden's Looptroop Rockers; and on some others, they were alone; or they would offer the full beat to one of their friends, like Tonedeff, or the ex-member Mr. SOS.

It was a big mess; and though, there was some kind of key topic, uniting most of the songs, and it was about the life on tour. A few comical skits talked about the inconvenience of their life on the roads, and some songs provided more details about this. "Don't Leave (When Winter Comes)" and "The Distance", for example, were laments about separation, remoteness, and the poor family life they created. "Nothing but Strangeness", on the opposite, was sharing funny anecdotes, in a much lighter way. "Never Come Down" and "Hypnotized" were about related topics, the consumption of weed and groupies, respectively. And on "Broken Van (Thinking of You)", the rappers talked about their old van, as if it was a mistress.

This was not enough to change this first edition of Strange Journey into a regular CunninLynguists album. By chance, though, it offered again fluid raps from Deacon and Natti, and top quality beats from Kno. It was still the same lyrics, sometimes humorous, sometimes introspective, and the same music, equally melancholic and lighthearted. And therefore it was much more than just a playful side project.