It took time, before Ceschi was able to propose Broken Bone Ballads, his latest album, he recorded with the help of Factor - now Factor Chandelier - another key and tireless activist from the post-indie rap scene. Five years happened, more exactly, since the rapper and multi-instrumentalist from New Haven had released his penultimate record; five years dedicated to the development of his label, Fake Four, but also to a short stay in prison, due to questionable drug dealing charges. 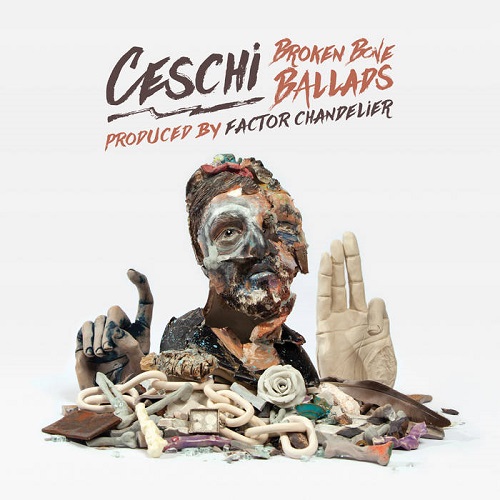 Five years is a long time. And though, the rapper's style hasn't evolved much: Broken Bone Ballads is not too different from the excellent The One Man Band Broke Up, Ceschi had released in 2010. This new album stays more or less loyal to his and Fake Four's usual ingredients and flavors: it is a collection of supersonic rap flows, à la Project Blowed, and sample-heavy beats, like in the classic hip-hop of the 90's, but mixed with folk sounds and indie rock influences, delivered by a man as comfortable with the art of emceeing as he is with playing the guitar.

Sometimes, Ceschi goes into utter rap tracks, like "Forever 33" and "Beauty for Bosses"; or he sings plainly and openly, like with the very nice "Bite through Stone" and "Elm City Ballad", or "One Hundred Dragonflies", a track sounding like some 60's baroque pop song. In some other circumstances, he combines both approaches, like with the opening "Choke Parade", which is made of pure raps, except for the hook, sung on luxurious brass sounds, with melodies reminiscing of Paul McCartney's. The rapper / singer often uses this mixed formula, most of the time successfully, like with the aforementioned song, and also "Rowing In Circles".

Broken Bone Ballads is named after an arm wrestling contest turned awry, but it is also about other matters: economic slavery is one of them, as well as the daily struggles of failed artists. Like he did on The One Man Band Broke Up, Ceschi is talking about his artistic frustrations. But he is no longer hiding behind a fictious character. His record is, more than ever, a confessional one, so intimate that it can get quite embarrassing, like with "Beyond the End", a tribute to his lost ones. However, more often than not, Ceschi is as convincing as he was on his previous album, using successfully an old trick, which consists in sharing one's pain on a light and catchy tone, like he does with the folkloric sounds of "Say Something".

Ceschi invited the right quorum of guests, his brother David, iCON the MIC King and Shoshin on "Kurzweil", and Sage Francis on the closing "Barely Alive", two complementary tracks, one claiming that life is hard and ungrateful, and the other that it is worth being lived. Also, this record is full of ideas, like with the accordion on "Elm City Ballad", a song about the place where the rapper grew up. And the alchemy with Factor operates as well as ever, both guys mixing in a seamless way their loops, samples and organic sounds. All in all, Broken Bone Ballads is completing further a discography, Ceschi's, now getting very close to first class.