Less than one year after their classic Tragic Epilogue, New York's trio Antipop Consortium would release an album aimed at the Japanese market, on an obscure label from there. If they had been a normal band, this would have been reserved to their most hardcore fans. APC, however, are notorious for being anything but a normal band. And though their first album would remain their major masterpiece – yes, we know, some people would prefer the IDM-oriented Arrhythmia, but they are wrong – Shopping Carts Crashing is not to be ashamed with the comparison. 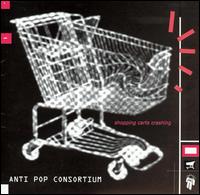 Like its predecessor, this new piece of work from the rappers High Priest, Sayiid and Beans, was full of iconoclastic electronic hip-hop, and the beats were as outstandingly and exceptionally creative as the raps. Each track, actually, was a new idea in itself; it could be the blueprint of a new musical subgenre. Even better: though it had a few boring times – "Verses", despite the support of female MC Apani B – this record had the bangers that were missing on the previous one.

As soon as in the opening song, the sounds of crashing shopping carts were announcing that the album would hit hard. And it was indeed the case: each track was appealing, predating a potential for catchiness that Antipop Consortium would display once signed on Warp Records: the beats were futuristic, weird, disturbing and rather austere, but the bass lines were fat and the samples quite addictive, as were the games the MCs were playing at, when they finished the verses of the others, or when they rapped in choruses. It worked almost each time.

Only these rappers could mix contemporary classical music instrumentals with gangsta lyrics, and make it work, like with "Excerpt from the forthcoming Epic Dogland". Only they could be so successful with reinventing the ancestral hip-hop / heavy metal alliance, like with "Lazarus Pit". Antipop Consortium, and only Antipop Consortium, could change what was supposed to be an anecdotic side project into a classic avant-garde record and an indispensable rap album. There a bands like this, which, in the apex of their careers, are just utterly unable to fail.