In 2002, Sage Francis stopped being the underground's best kept secret, due to the release of his first album, Personal Journals. Thanks to some great tracks and beats – maybe, also, because of his rock music compatibility – and despite the record's heterogeneity, the rapper and spoken word artist from Providence suddenly extended his audience. However, per one of the universal laws of music, some fans were disappointed. They thought that his Sick of… mixtapes had been much more exciting, especially the first of the series, Sick of Waiting Tables... 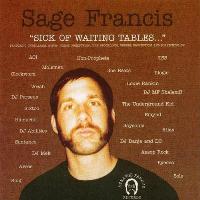 It is challenging to trace this release's origins, since it was initially restricted to fans only – Sage Francis would be adamant that it wasn't a regular album – and sold either in concerts, or on the Internet. However, and despite diverging data in this regard, it seems that it was released in 2000, the very year when Sage won the Scribble Jam MC battle. It is certain, though, that it collected materials the Non Prophets MC had recorded over the past three years - and it contained all kinds of them: MC battles, live tracks, freestyles on the radio, or real studio songs. It also proposed raps, slams, a bit of raga dancehall on "Gun Gods", with Louie Rankin, and a live cover of Devo's "Whip It", at the end of "When Freedom Ring".

It truly was a mixtape, an eclectic and chaotic one, full with unrelated tracks, and sometimes a poor lo-fi sound. Its only aim was to start building a network of loyal fans. This release, also, was another step toward the emergence of the post-indie rap scene, which would structure itself through labels like Anticon and Rhymesayers. Many of its key DJs (Abilities) or producers (Joe Beats of course, but also Alias, Sixtoo, and the Molemen's Panic and PNS) were present here, as well as some of its most significant rappers. One posse cut, more particularly, "Orphanage Freestyle Part 1", had many of them: Aesop Rock, Blueprint, Eyedea, Illogic and Slug were all freestyling on it. So was Sick of Waiting Tables...: full of people, full of songs, and actually a real mess. But this is precisely why it was so good.

It disclosed the many faces of Sage Francis: his political, and his introvert side; his punchlines, as well as his more literary lyrics; his honest and angry man rants, or his sarcasms; his job as a pure rapper, or as a slam poet; his solo works, as well as his collaborations, like the playful "Drop Bass", with Vocab, or the big and beatboxed joke that "The Best Of The Underground Kid Battle" was; some boom bap, or darker and more experimental sounds, emblematic of the time.

Also, the mixtape contained some heights of the rapper's career, like "Rewind", its trumpet, and its confession about a complex love affair; or like "Testimony", with Sole and Sixtoo, rapping on a beat quite typical of the latter. After that, Sage Francis would release much more consistent and cohesive projects. But never again, would we find, on one single release, the full portfolio of his many talents.