Eventually, Glue's discography would be short. Apart from a few singles, a tour CD, and an EP, Sunset Lodge, the trio would have delivered two albums only, across its career. Each record, though, was a strong one, and this is the only thing that matters. Each was the product of a perfect alchemy between the rapper Adeem, the producer Maker and DJ DQ. They were both perfect examples of records made with care, without unnecessary considerations like making something new, or, on the opposite, complying to such or such heritage. And they were recorded by three equally skilled protagonists, all sharing similar views. 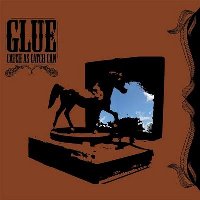 However, even if both records proved to be well balanced, even if they both staid equally distant from the boredom of conformism and the vanity of experimentalism – indie rap's two plagues – Seconds Away and Catch as Catch Can were different. On the former, Adeem was playing the emo and introspective card, while on the latter – surprisingly released by the Fat Beats label – the rapper invited us to fight against pessimism and defeatism ("Stride"). He looked outwards, he was politically committed, and he had become a critical observer of the world. Actually, one of the tracks was titled this way: "The State of the World".

This record was more expansive, more explosive, more extrovert. It was obvious with the lyrics, but also with the quicker rhythm ("Beat Beat Beat" was pulsing hard, "Glupies" had sputtering drums), its angry rock influences ("A Lot to Say", "Making a Mess", the crazy finale of "Vessel"), its funky groove ("Restless", "Belmont and Clark") and, last but not least, DJ DQ's scratches. Actually, his turntablism was wilder and more present than on the previous records, inclusive of instrumental tracks like "In Between Her", one of the most notable. Only a few other songs opted for a quieter way, a jazzier one, like "Hometown Anthem".

Something was lost, however, with the new Glue. We missed the fragile tension of the other album. Actually, the songs the closest to Seconds Away were the most convincing, on Catch as Catch Can, like the delicate "Never Really Know", where Adeem talked about the illusion of the past; or the concept song "Vessel", a crescendo, where the rapper was going both ways, the introspective and the conscious ones, the album's finest moment, along with "Someone Who Dares", an instrumental track no less than sumptuous, thanks to its scratches and cello.

Actually, this album main strength was its last three tracks. It may have been less strong a record than the other, but these songs were among the trio's very best.