The hype followed its usual way, with DonMonique. It began with a defining song, "Pilates", which was already a few months old, when its video – featuring a few other rising stars, like some guys from Awful Records - started buzzing. Later on, she released a free EP, with a cover art representing her with top model Chasity Samone in a provocative pose, reminiscing of an old picture of Diddy. Afterwards, viral marketing worked well, and she started being mentioned pretty much everywhere, inclusive of the French blogosphere, probably because our fellow citizens always had a strong interest for the Big Apple and East Coast hip-hop. 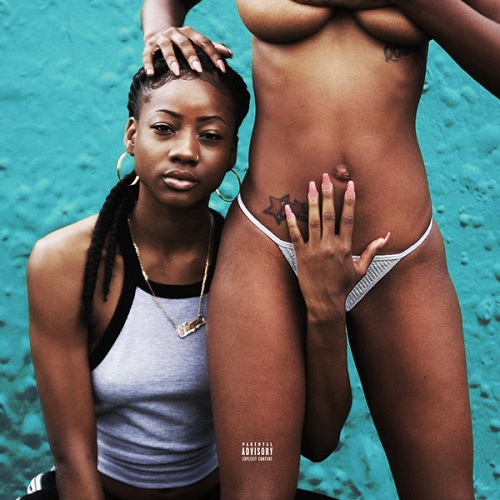 And actually, the sounds of New-York are perceptible on Thirst Trap, an EP produced by Stelios Phili, another local, known for his beats on A$AP Ferg's solid Ferg Forever mixtape. They are heard as soon as with the heavy "UNTLD", where DonMonique raps along Remy Banks and Wara From the NBHD, on the next track, "Drown", and on the conclusive "Jada". Such songs are closer to the relatively slow tempos of yesterday's hip-hop, than to the relentless ones of todays' rap. Sample loops and heavy basses are there too, like on "Fifty Kay", with Noah Caine. And with its disturbing piano keys, "Tha Low" - which features a great Danny Brown - is also part of that tradition. Moreover, as soon as with the phone message that opens the EP, all of this is strengthened by the low and threatening voice of the rapper, also very close to the somber tones of New-York's hip-hop in the nineties.

However - and unsurprisingly considering the title, or the rapper's connections with rappers from Atlanta - DonMonique has other influences. She refreshes the good old boom bap formula with more recent sounds. Less dry ones, from other places. "Pilates (Kendall, Kylie, Miley)", the track that revealed her, looks more like a sobered version of California's ratchet style. On it, she goes through a drug-inspired name-dropping exercise akin to the likes of Migos. Some other tracks on Thirst Trap, like "ION", sound like slowed-down trap music, and the Auto-Tuned hook, as well as the sing-song on "Drown", have an undeniable Southern flavor. They show that the rapper's aim is more about rejuvenating NYC rap, than preserving it. Let's wait and see if she reaches that goal, with her next release.