One thing is certain: after their mythical Funcrusher Plus, nothing could challenge the iconic status of Company Flow, in the hip-hop underground. Their next album, though, could have rattled it. Actually, just when the group was on its way to imposing its uncompromising kind of rap to a growing indie audience, it had chosen to come back with a more difficult album, even harsher and crazier than the previous one; and furthermore, it was purely instrumental. More loyal than ever to its motto, "independent as fuck", Co-Flow wasn't going the easy way. 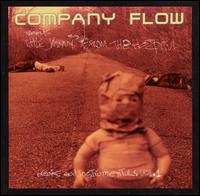 By removing the raps, however, wasn't Company Flow making a virtue out of necessity? Wasn't the ex-trio finding a way to cope with the departure of its best rapper, Bigg Jus? By making their music exclusively instrumental, weren't El-P, the beatmaker, and Mr. Len, the DJ, hiding a lack of inspiration? And what about the odd concept around Little Johnny, some imaginary character supposed to represent the bad shape of the US society? Wasn't it too much conceptual?

As a matter of fact, El-P and Mr. Len would release a CD version of Little Johnny in Europe only, a place often considered as friendlier to avant-gardism, than the US. And some would be skeptical, a bit dampened by the tough sound of the album. Their concerns were unfounded, though. This record was just another evidence of Co-Flow's inclination for somber and scary ambiances. It even had a track, "Indelible Hybrid", reusing the great beat of "The Fire In Which You Burn. And the group – well, the duo now – still had some stories to tell, as with "Suzy Pulled a Pistol on Henry", a reinterpretation of De La Soul's "Millie Pulled a Pistol on Santa", reporting the bloody vengeance of a young victim against a pedophile.

The beats and the sound had evolved, though. Little Johnny was more abstruse than ever, despite the few bangers that "Friends Vs. Friends", "Bee Aware", "Worker Ant Uprise", "Happy Happy Joy Kill", and the brilliant Transformer-sounding "Gigapet Epiphany", were. Also, it delivered something new, unrelated to the various kinds of instrumental hip-hop that existed in 1999. It didn't look like DJ Shadow's soundscapes, the virtuoso craziness of turntablism, or the melancholic contemplation of trip-hop. No, it was something entirely different.

Sometimes, the duo's ideas could be reminiscent of the most experimental side of electronic, or the abrasive sounds of some guitars would remind rock music; but this was still, mainly, essentially, hip-hop music. Also, it forecasted the prog rap style that would characterize El-P, when he would start his solo career with Def Jux – actually, and though the record was released by Rawkus, the name of his new label was already written on the cover art. It was also the ultimate proof that, by 1999, Co-Flow was the open and uninhibited group that rap had been missing.