Japan, among others, is the paradise of hip-hop as we like it. When the Japanese don't release exciting rap albums, they do the same with records from others. Concerning indie hip-hop, for example, we had already noticed the remarkable work done by Hue Records. And though the CD in itself was not extraordinarily packaged, we can also praise the label Nature Bliss for having rereleased Knowself's unofficial first album. 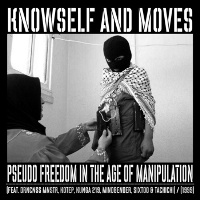 Well, to be honest, Pseudo Freedom in the Age of Manipulation had already been available in a CD format, three years before, thanks to Legendary Entertainment. However, by then, the stocks being almost as depleted as for the original cassette released in 1999, titled Everything is Under Control, this Japanese initiative was more than welcome. It brought us back directly to the best moment of the Canadian indie scene emergence time.

By the end of the 90's, in times particularly effervescent around Halifax, Pseudo Freedom in the Age of Manipulation was the product of an encounter between two key players of the Canadian underground. While the invaluable DJ Moves was making the best out of his machines, Knowself was revealing the warm, deep and impassive voice others would discover three years later on the remarkable Aleph. In addition, with the posse cut "Reality of Birth", and elsewhere on the record, the two partners were seconded by other essential Canadian rappers, Mindbender, Sixtoo, Tachichi and Kunga 219, who completed the quick, imperturbable and falsely monotonous flow of the main MC.

The result? A record entirely made of dark beats, threatening scratches, suffocating ambiances and obscure political or religious thoughts. A collection of harsh raps that needed repeated listening to reveal their twisted charms, just as the excellent "Her", or the ingenious organ loop on the great "Probability Distribution". An oppressive and paranoid album, to be compared to some others released by the same years, around the same district, like the Sebutones' 50/50 Where It Counts or Recyclone's Dead World and Corroding the Cellular Engine.

Pseudo Freedom in the Age of Manipulation is still a major piece, for any person willing to taste and understand the morbid mood which took over the indie rap scene at these times, in Halifax or elsewhere. A must-have, finally made available to all, thanks to Legendary Entertainment, and to our beloved Japanese friends.