To Whom It May Concern is a cult album. And like all cult albums, it had a difficult start. In 1991, in the heyday of Los Angeles' gangsta rap, Aceyalone, Mikah 9, P.E.A.C.E., Self Jupiter, J. Sumbi and M.D. Himself, all emerging from the jazz scene of Leimert Park and the Good Life Café, seemed to live in the wrong time. Their weird jazz, their improvisations, and their virtuoso flows didn't fit with the hip-hop appetite of that era. And they hadn't been able to release more than 500 cassettes and 300 vinyl copies of their first LP. 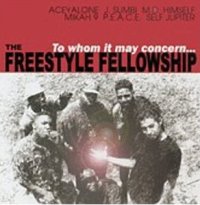 Those who discovered the album through its rerelease in 1999, however, may have found it fully aligned with the flavor of the era. To Whom It May Concern, indeed, had aged incredibly well. Built for a large part on a jazz basis, with predominant saxophones, pianos and basses, but never approaching the usual jazz rap formula, it allowed each MC to express themselves with frenzy and a rare freedom, to freestyle, instead of rapping in a too austere and controlled way. Despite the extreme volubility of the rappers, their album never was uselessly talkative. And each track, there, looked like a world in itself, unique and original.

The African sounding threnody of "7th Seal", the languorous "Sunshine Men", the choir and saxophone of this "Physical Form" haunted by P.E.A.C.E.'s warm voice, are all anthological. Same thing for the jazz and quick piano of "120 Seconds" and for the extraordinary, speedy and futurist "We Will not Tolerate", both displaying the experimentalist side of the Freestyle Fellowship. And let's not forget their act of bravery, this long, rich and complex "5 O’Clock Follies", where Mikah 9 delivers some political thoughts on a bouncy bass and a crazy organ. Also, later, the album reaches its climax, with a poignant "For no Reason" where P.E.AC.E. embodies a murderer questioning his reprehensible action.

The Freestyle Fellowship would never meet a huge success, but the next episodes would be fascinating : they would become underground gods and release other great albums like the classic Innercity Griots; Aceyalone, P.E.A.C.E.'s and Mikah 9 would launch solo careers, and give birth to the Project Blowed and Haiku D'Etat projects; and in the late 90's, the new indie rap scene would sanctify them. All these exciting chapters of rap's history would be the natural consequences of this fundamental and still fresh To Whom It May Concern.