Prior to this album, Qwel was mostly known as a member of the Typical Cats, one of the main acts of Galapagos4, an indie rap label from Chicago. His two albums, If It Ain't Been In a Pawn Shop... and The Rubber Duckie Experiment, also received some praise in the underground. As for Maker, he had authored Honestly, a semi-instrumental record, and produced Seconds Away, another great album recorded jointly with DJ DQ and Adeem, under the name of Glue. 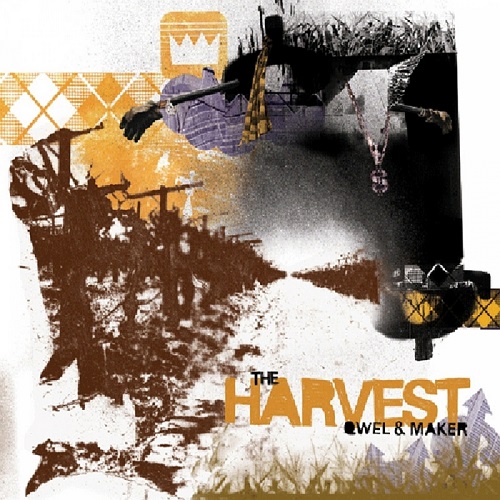 Having them collaborating on a full-length project was anything but a surprise. Qwel and Maker, indeed, were coming from the same circles. Actually, they had already recorded a song together, available on Honestly. And Maker had produced some tracks – the best, most of the time – on Galapagos4's most recent releases. However, The Harvest – the first of a series of projects inspired by the four seasons, Antonio Vivaldi-style – was some kind of revolution. Finally, Qwel had found the beatmaker he had missed so far, the one who would fit his style the best. As a result, he would be outstanding all along this new album, declaiming without a pause his relentless kind of rap, previously perfected through freestyles and MC battles.

Whatever he was doing - commenting about the current state of hip-hop ("The IT In Keeping It Real"); disparaging his country ("The Siren of Liberty Island") or the mass media ("The Network"); being critical and sarcastic, tearful ("Ugly Hungry Puppy", "Ruby Ragdollenne"), expressive, sensitive though not "emo", or in love ("Where I Go, There I Go"); moving from spoken word to double time - Qwel was almost flawless. He knew how to play with samples and loops. He knew when to let them go, or when to interrupt or mistreat them. He employed various tones, and Maker's beats used plenty of instruments, but none of this was garish.

The Harvest is one of the gems, indie hip-hop sometimes delivered in the 2000's. It is a lost classic, released by two unsung heroes, talented enough to be respected in the indie world, but not demagogic enough to reach a larger audience. Their formula, actually, was not exactly new, it was deeply rooted in the 90's; but it was close to perfection. Together, Qwel and Maker had released a rare album in rap music: a highly delectable one, from the first to the final track.