Antipop Consortium's very name, as well as the cover of their first album art, hinted clearly about the trio's purposes: they were all about arts. Originally identified through the Nuyorican Café and the Rap Meets Poetry movement, High Priest, Beans and M. Sayyid – plus E. Blaize, the DJ – belonged indeed to New-York's spoken word scene. Their influences were jazzmen such as Sun Ra and Ornette Coleman, their collaborators alt-rap figureheads like Company Flow and Mike Ladd, and they worked with luminaries like Arto Lindsay, Alec Empire and Vernon Reid. 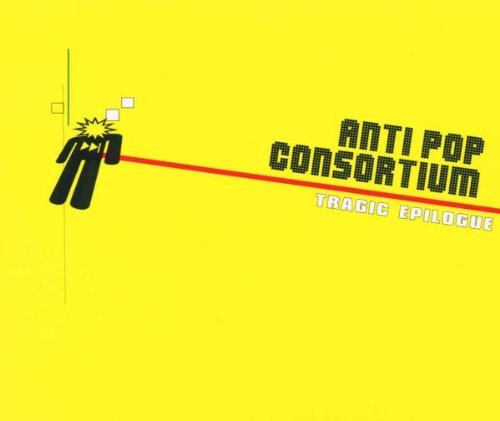 As a result, and quite expectedly considering the trio's name, Tragic Epilogue was a complete opposite to the new pop, hip-hop had turned into by the late 90's. Indeed, no song on Tragic Epilogue would qualify as a hit single. Their music, some kind of renovated version of 80's electro rap, was too sober and too synthetic. Their rhythm patterns were too strange. The same could be said about their lyrics:. Though all three MCs were outstanding, they were obtuse. They were, actually, on par with the two cult underground rappers the trio had invited on the record: Organized Konfusion's Pharoahe Monch, and Freestyle Fellowship's Aceyalone.

This was as tenebrous as Funcrusher Plus, and as abstruse as Kool Keith's raps. And though, with the relentless "Laundry", the incisive electro of "Nude Paper", the insanely quiet "Your World Is Flat", the futuristic "Here They Come Now", the experimental "Moon Zero X-M", the rough "Lift", the free jazz-influenced "Eyewall", the long and languorous "Sllab", the powerful bass of "Smores", the Apani B-supported "Disorientation", and the bizarre "What I Am", Antipop Consortium had one of the most amazing collections of songs ever heard on a hip-hop album.

The experimentalism and strange poetry of Tragic Epilogue seemed to push rap music into new directions. But in reality, Antipop Consortium did just opposite: they were retro. They were bringing hip-hop music back to the 80's, in Downtown Manhattan. They were going back to a time when New-York's art intelligentsia had become fond of hip-hop, when rap and electronic music were still one genre. And while operating that way, they created deliciously odd songs.