Judging by his strange, slow rap, his foggy beats splitted in different parts and his true poetic skills, it was logical that Buck 65 became affiliated to Anticon. He is one of the few, though, along with his fellow Sixtoo and the crazy Dose One to convince Sole's label many oponents. And his album Vertex could be the best of the genre having been released. We managed to catch Buck after a very long and intense emails exchange with his promoter. It was worth doing so much effort. 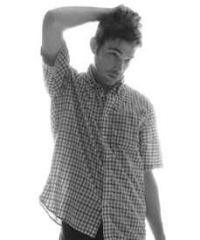 I noticed that most articles I read about you mentioned your age - around 35 - as one of your specificity? Usually not too old, except for a newcomer in the hip hop world. First, are you tired always being questioned about your age? If not, could you tell us what you did before Vertex and the Sebutones? Hip hop, other kind of music, or something completely different?

How and when have you become affiliated to the Anticon crew?

I connected with Anticon in 97’ when sole still lived in Maine, which is very close to where I live in Nova Scotia. Based on the music we were making, our meeting was inevitable.

You also have your own label (4 Ways to Rock) ? Can you tell us about the other acts of this label (I just know Mr. Dibbs) ? And by the way, which are the 4 Ways to Rock?

The first "Four Ways" release was a Sebutones 12", then an Obscure Disorder 12".  We’ve since done records with Moka Only and Governor Bolts. Besides Dibbs, that’s it. The four ways to rock are the four elements of hip hop: b-boying, djing, graf, and mcing.

Your affiliation with Anticon is understandable, considering your approach to hip hop. Do you consider yourself as an experimenter? Is your music a deliberate mean to make rap advance, or is it just the natural way you do hip hop?

I actually consider my approach a throw back to how it was done in the mid 80’s. But I also consider myself an open minded person and I think you can do anything with hip hop. But I don’t necessarily think I’m doing anything that hasn’t been done before. I want to see hip hop advance but also have it’s traditions preserved.

I also noticed that lots of funny details are spread into your lyrics-this Jesus being downloaded, these stupid DJ’s who would give their right arm to be ambidextrous -and that some of your rhymes are strange and highly poetical- "Sleep Apnoea" for instance. How does all this come to your mind?

Mostly, all my waking time is a constant meditation on words-it’s my obsession. I like to sculpt words. I think of words as strokes of a paintbrush as opposed to a percussion instrument like some m.c.’s. But much of my best writing has been done in lucid, almost trance-like states that I can’t really explain. Sometimes I’ll wake up in the middle of the night and start writing frantically "Sleep Apnoea" was written in five minutes-almost freestyle.  By the way, I’ve never done drugs.

Judging by several of your songs, you’re a great baseball fan-and maybe practitioner. This sprot is not well known in Europe:do you have any argument to convince us about how great it is?

Baseball is a game that requires much strategy but also speed, strength and grace. It is also a gentleman’s game. Plus, there is so much romance and tradition that I associate with the game.

I organized a game on my webzine: I asked my visitors what was the relation between Buck 65 and Amanda Lear. Someone answered that both of you have long legs, someone else that both of you are drag queens (!!). And finally, someone almost got the answer. Would you have answered correctly?

I definitely would have made the connection right away……

The answer is that there is a cover of a Roxy Music song on Vertex. This song comes from the For your Pleasure LP -an album I myself love- with Amanda Lear on the cover art -she is someone famous in France. This is quite unusual for a hip hop artist to cover such a band. Why have you chosen this? Is Brian Eno your idol? Or is it just for this specific song?

….all things Roxy Music appeal to me very much. The whole asthetic is brilliant. "In every Dream Home A Heartache" was my introduction to Roxy Music. I just thought the lyrics were some of the best I ever heard. I wanted to pay tribute to that. Brian Eno is pretty much a genius. I like to think he would like me. Maybe I am just trying to get his attention.

There is the sample from a French-speaking film on your Vertex album, but I did not recognize it. What was this?

If your thinking the quote in "Slow Drama" is a French translation of_by Edgar Allan Poe taken from a record in my collection. I love French film though.

By the way, you being a Canadian, do you speak French?

I do speak some French, but not as well as you speak English, so this is probably the best way to do this. Thanks for making the effort.

Let’s finish with the 3 standard questions French interviews always ask to North America HH artists. First, do you plan visiting Europe? Do we have any chance to see you and your fellows here, in short or middle term?

I’m visiting Europe (including France) this coming winter, and I can’t wait.

Most of our compatriots do not understand English lyrics: do you consider they cannot appreciate your music just as Americans do?

Honestly, I’m really only ever thinking of myself when I make records. But I like to think anyone would listen with interest.  I love instrumental music and always include lots of music without any words at all, on my records.  Plus, I never rap fast so maybe that gives people with little English half a chance at least.

Third and last question: do you know French HH?

I know lots of French Canadian hip hop and some of it is o.k. I’ve heard some stuff from France but honestly I’m very particular in my taste for hip hop.  I don’t like much American stuff either.  I liked early solar stuff.  I don’t know as much as I’d like to.  Hopefully when I come over there someone will school me.

Any special message or statement to end this interview?