Dan The Automator is Gorillaz, Deltron 3030, Dr Octagon and many other things. He is a music star, then. He is a very busy man. When someone tells you he is available for an interview, obviously, this does not mean he’ll share a whole afternoon with you. And you finally end up with answers that are even shorter than the related questions. And you don’t learn anything new. Anyway, let’s publish it. That’s Dan The Automator after all. 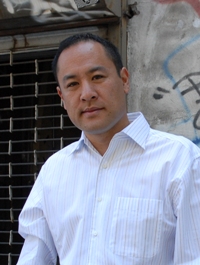 First, I will be interested in the hip hop side of Dan The Automator. Are you still listening to rap? What would be your own diagnosis about hip hop's current state in 2006?

Very strong. There are a lot of records I don't like, but the good ones are very good and Jay Z is back.

In pop music history, you will remain as the guy who did music that appealed to both indie rock fans and hip hop heads. But since Dr. Octagon and Handsome Boy Modelling School, a large number of artists have occupied the space between these two genres, for example Anticon and Anticon-like artists. Are they artists you have an affinity with?

I appreciate everything that the various people do, but I kind of just do my own thing and don't get too involved with listening too much as it can end up having an influence on what I try to do. So, things that follow a path I am already on, I probably don't follow as closely as things that my ears pick up on because I am not familiar with the style of music or production

You collaborated with a very large scope of artists. How have you built this network? Was it Dr. Octagon's critical acclaim that launched everything?

It was the other artist's appreciation of Dr. Octagon that opened up the doors for me to work with them.

Originally, how did you hook up with Kool Keith?

Kool Keith has recently released a Return of Dr. Octagon record and Gorillaz's second album was one of last year's big successes. Why have you not been involved in these sequels of two of your most significant projects?

People move on and do different things, but for the record that was not a real Dr. Octagon record.

Can you tell us a bit more about the 2K7 video game you made music for? Are you yourself a big video games fan and practitioner?

I don't play video games too much. I work with computers, so I don't like to sit in front of more screens to relax. The 2K game was something I wanted to make because it allowed me to combine mainstream rap, underground, gangster, backpack, west coast, midwest, eastcoast and south.

You have always surprised everyone with new projects, new aliases and new collaborations. Can you tell us a bit more about what you plan for 2007?

New Deltron record is next on deck

I know you have been trained to classical music when you were younger. Do you think this had an influence with the way you did and you felt your own music?

Not at first, but as time has gone on I do see its influence. Mainly, I play a lot of single note lines (as opposed to chords) and I like key variations a lot (classical routinely adds sharps and flats during a passage).

As someone with Japanese origins, do you keep an eye on the music that's made in Japan, and more specifically hip hop? I'm thinking about artists there that I personally really like such as Sapporo's duo Tha Blue Herb.

I know a little about it, but I am not an expert. I work with Nigo and those guys so I am more familiar with those projects

Lots of French guys noticed your homage to Gainsbourg on Lovage's cover art about five years ago. How have you entered Gainsbourg's world? What would be your favorite among his songs?

"Melody Nelson" and "Je t’Aime… Moi non plus" are my 2 favorites, but I just love the style and the attitude.

More generally, are there other artists you like in French music?

Have you any final message to France to close this interview with?

Just raise a glass of calvados and enjoy!