You may not know EiboL (say it "eyeball"). This guy, though, has been active on the New York rap scene since the late 90's. With Losaka, StayInSane and Hippo, his colleagues from the Hand Held Aspects (H2A) collective, he recorded the remarkable From Point A to H. He is, moreover, the boss of Fingerprint Records, a label known for releasing Nobs' solid Workin' album last year, and he is one of the rapper's producers. Both men, also, belong to Neandertal Youth, a band which authored another remarkable underground record, Unearthed: The Early Years. 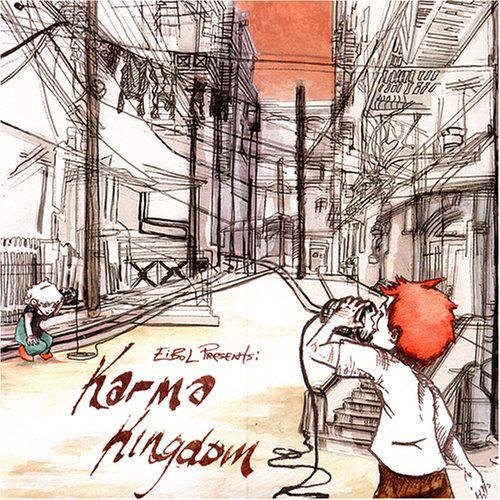 Are you still following? Well, maybe not. Truth be told, all these names are rather obscure and confidential ones. So let's focus on the essential: Karma Kingdom is the name of the solo album EiboL released this year, and it is damn good. Conducted for one hour on a frantic pace by the rapper and producer, it is full of outstanding tracks, starting with the catchiness of the voices and violins on "All for What", the little piano and the chorus of "Ask ?’s", the quieter "Rhythm" and the saxophone on the stirring "No Love Lost". All these tracks are among the best rap songs released this year. And fortunately, all are available on the same record.

Almost entirely recorded by one individual only - except for DJ Gyro's cuts and the sporadic contribution of a singer, a guitarist and a saxophonist - Karma Kindgom has a consistency 99.99% of all rap albums lack. It is quite diverse, though. Without sounding cliché, EiboL tries many things: guitars and melodies, some nu soul with J. Fuentes on "Track 36", or some jazz rap with "Place to Be". He plays with simple but smart loops, like with the excellent "Peel the Nikes", or he does dance-floor music, with "Dedication" or the bass-blended "Burnin", the only song produced by someone else – Losaka, actually. And it always, always, works well.

Karma Kingdom, is not free of flaws. There are a few, like "Vagabond Song", clearly not the best album conclusion ever. And some other tracks are also dispensable. But these observations have limited value, considering the overall top quality of Karma Kingdom, undoubtedly one of the finest rap records in 2005.