Beatmakers able to release three excellent albums within a few months aren't too many in the hip hop world. But Maker is one of them. Honestly, The Harvest with Galapagos4’s Qwel and Glue’s Seconds Away with Adeem are all "must have" records. The recent release of a new instrumental album, Shooting The Breeze was an opportunity for us to ask Maker for a bit more information about him. 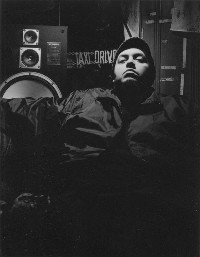 I had never heard about you before 2003. Then, you suddenly appeared with your Honestly album that featured artists from many places such as Adeem, The Nacrobats, Qwel, Thawfor, Josh Martinez and Governor Bolts. How have you hooked up with so many people?

I was in a group called Them Badd Apples and we released an album (self titled) in the late 90s and we opened up for many people. That’s one way I met a lot of people. Also just from being around the scene in Chicago. I made a lot of friends in the hip hop scene here.

What about this first band, Them Badd Apples? What's the story of it? What records do they have released?

Them Badd Apples is a crew of guys I grew up with, some of which you can find on my Honestly album. We always wanted to make music and one day we decided to start and made some music. That’s how I got my start making beats for them. We are still working and plan to release something in the near future.

How have you been initiated to producing? Did you have a specific mentor or a hip hop producer you consider as a model?

I started making beats without anyone telling me how to do it or guiding me. I learned about records and the making of beats from just doing it.. I never had a personal mentor but at the time I started DJ Premier, Large Pro, Prince Paul was in constant rotation and the production on De La Soul’s Bulhoone Mindstate was a big influence. I thought it was genius.

You've just released the Sunset Lodge EP with Glue. Can you tell us a bit more about it? What about the new Glue album you're preparing?

Yes, the Sunset Lodge is in between Seconds Away and the new record we are currently finishing. We keep growing as a group and I feel our music is getting better as we learn how to work with each other a lot better. The Sunset Lodge is just a small taste of the direction we are going. The next album Catch as Catch Can should be out sometime next year with a much bigger budget, better distro, and it will be everywhere.

Was your collaboration with Qwel a one-shot record or is it a permanent duo?

Well, I am not sure about a permanent duo, him and i are that as friends... Musically I think he has the ability to do so many different things with so many producers. as for a one shot.. That’s not the plan, we talked about making another one and we will make it happen.

Do you plan any other full-length collaboration with another MC?

As of right now, no solid plans. I would really like to work with another MC on a collaboration.. I like being able to produce a whole album and set the mood and the ups and downs. Maybe in the future.

Shooting The Breeze is your first album that is completely instrumental. Have you felt the need to release an album that was 100% you?

After I released Honestly, I had many people asking me when i would release a purely instrumental album. Also a lot of people asking for instrumental versions of the harvest and the glue records. That’s what made me want to do that.. I originally started out making beats for people to rap too.. But it was not a hard transition for me, the instrumentals on honestly helped me out in that decision.

You've recently answered another interview with HipHopSite where you mentioned the Express Rising album by Dante Carfagna as a big influence. I've never heard about it. Can you tell us more? Where can we find this?

Yes it was. Dante gave me a copy of it when i went to one of the famous funk nights at Dannys Tavern here in Chicago. The album, all instrumental painted a mood that I have not experienced with any albums in recent memory. I wanted to do that with Shooting the Breeze.. It’s not anything close to what he did on that album but I tried to set my own mood and take listeners on a ride without over doing it.

As for finding it.. I am not very sure.. I heard it was a small press and may already be a rare collectors item. I am sure you can hunt it down at your local record store by asking them to try to order or google it. Express Rising on Memphix Records.

Who's your favorite producer these days on the hip hop scene?

Hmm my favorite producer? I have many. I really like what Kanye has been doing this year. Edan’s new album has great beats on it. Ant from Atmosphere has been making everyone step it up. The Opus, Alias, Mike Gao, so many others.

I've always appreciated the samples you used for your music. If this can be published, can you tell us about the records you used for "Broken Promises", the first and last tracks of Honestly and "Uphill Climb"?

I’m sorry I can't.. But with respect I wish you the best of luck looking for them! Go bears.

I may be wrong, but all these samples have the same kind of 60's / 70's feeling in them. Are there specific genres and periods of time where you look for samples?

Yeah, a lot of the records I use are 60-70s.Genres range from jazz, rock, international (Bollywood, Spanish etc.), soul, funk. Even children’s records.

I remember you were part of the Galapagos4 tour in France last year. How was this journey and series of concerts in France for you?

It was great, I loved it. I love France and I can not wait to go back. It was an honor to travel threw France spreading the Galapagos music with brothers. I met a lot of very cool people.

Is there any plan of you coming back in Europe soon or later?

Yes I hope to come back to Europe very soon.. No specific dates yet but I would like to come out with Glue and with DJs. my wish is as soon as possible. See you all soon!

Any final message and statement to France to end this interview?

Yes, France... I miss you. your mountains and your trains and your history and fantastically nice people I met and took care of us when we came. Anyone interested in booking us in France please contact joshua@montereyinternational.net.

Visit www.ramonarecords.com for updates on what we are doing and where we are at. Updated with new music often.

Thanks and god bless.