One year after his first EP Music for tu Madre praised by hip hop's most careful reviewers, New York's J-Zone is releasing a second one, A Bottle of Whup Ass, a EP full of ideas and imagination and this summer's best records. Let's meet a rapper who takes life on the right side. 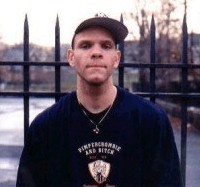 It’s been now a few weeks since you released your A Bottle of Whup Ass EP, and I must confess it completely surprised me. I was expecting lots of things from many underground acts this year, but not from you, because you were completely unknown to me. Can you please tell us who you are ? How and when did you start your hip-hop career?

I was always playin instruments and record collectin since I was a kid, but i got into making beats, DJin and rhymin about 8 or 9 years ago, my freshman year of high school. I was mostly into production, but I never found anybody to work with. When i was in college, I was a music major and I was doing an album for my senior project. I got sick of giving people beat tapes and chasing people around, so I rapped on the album, by force I guess. I found Huggy Bear and Al-Shid (The MC's I'm working with) and a few others during the making of the project and put them on it. Last year, this project wound up being released unintentionally. It was my first EP, Music for tu Madre.

I tried gathering as much information on you as possible to prepare this interview, and I read that Vance Wright (Slick Rick’s DJ) was your teacher in hip hop. Is this correct?

Word. When I was in high school, Vance had a local studio and I always loved his work with Rick, so a friend brought me to meet him. I played him demos and he pulled me in as an intern. I eventually became a head engineer. I was hungry, and the youngest kid there, so he hooked me up. I was makin music before I met him, but he taught me the basics of audio engineering and got me producing for other artists, gettin my chops up.

Your music is not just NY rap. It’s something which sounds familiar, but I can’t classify it into the East Coast, West Coast or whatever category. What are your influences?

You are based in New-York : what are you connections with the local rap scene?

I don't have many. I don't dig the scene much here. Kids walk around with that 'I'm underground, I'm a backpacker, let's save hiphop' crap. Too much politics, not enough music. The market is flooded too.

What really impressed me on your EP is that, except for the participation of your two Old Maid Ent. fellows, you took everything in charge : production, DJing, MCing. How did you learn all this ? How do you manage this, especially when on concert?

At shows I just rap. I do all the cuts for the albums and do all the beats, but at the live show, I have my show DJ, DJ Contakt, handle the set. I learned all this by being a hermit. If I didn't make music, my life would be pretty boring. I got bored with hangin out at a young age. Unless it pertains to music or girls (haha), it's hard to get me to leave my house. I'm usually at home workin on my craft, so I try to master 3 things.

There are 2 other very good MC’s on your album (or EP, I can’t decide it) : Huggy Bear and Al-Shid. What is the next step for them?

Huggy looks Pee Wee Herman in pimp mode. He and Al-Shid aren't signed to me because I don't wanna hook anybody to a contract for any long period of time. I'm tryin to develop them and produce them, and hopefully get them recognized, cause I'm not rappin for much longer. They have stuff ready, but distributors are scared to touch it unless I rap on it because they're not established yet.

What about your own future ? I read that you were preparing a real album ? Will this be something completely new, a compilation of your 2 EP’s or something in between?

Something like a compilation. Not that many people heard my Music for tu Madre EP, so half the songs will be a 'best of...' thing from both EP's, and half will be new stuff, but it will be an Old Maid family thing. I won't rhyme for more than half the album, so to call it a 'J-Zone' album would be misleading. I'll produce the whole thing though. I might just produce other acts though, I'm not sure yet.

Let’s finish with the 3 questions French interviewers always ask to US HH artists. First, do you plan visiting Europe? Do we have any chance to have J-Zone or Old Maid Ent. concerts here, in a short or middle term?

I'm slated to come to Europe in October. The promoter is working on the itinerary.

Most of our compatriots do not understand English lyrics : do you consider they cannot appreciate your music just as Americans do?

Not true. They'll feel the beats, the flow and the energy, maybe not the rhymes though.

Third and last question : do you know French HH ? My own opinion is that it is not as good as some people say, but let’s speak frankly?

I haven't heard much French hip-hop, just one French kid on a track with Americans.

Any special message or statement to end this interview?

People take themselves too seriously. Have fun. Nobody cares that you been rappin since 1982. Nobody cares how true you are to hip hop, nobody wants to hear you talk abou wack MC's for a whole album. Make music and entertain. Go out and buy A Bottle of Whup Ass. At least your girlfriends and mothers will like it.