The story of the Dilated Peoples demonstrates that the underground can be a way to redemption, sometimes. Three years after they started in 1992, Babu (DJ), Rakaa Iriscience (MC) and Evidence (producer and MC) realized that they wouldn't get a place in hip-hop's highest spheres, when Epic decided to close its subsidiary, Immortal Records, with which they had a contract. Consequently, Imagery, Battle Hymns & Political Poetry, their first album, wouldn't be released. This setback, however, wouldn't be definitive. 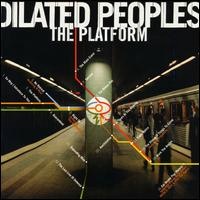 Starting from scratch, the band would join ABB, an independent label, while, in parallel, Babu would rally other turntable virtuoso in the Beat Junkies. Together or separately, the Dilated Peoples would become figureheads of the Californian underground. Later on, when time would come for like-minded Easterners like the Roots or Mos Def to conquer a larger audience, they would have the opportunity, at last, to release for real an album on Capitol.

This edifying story could be used to educate any wannabe rapper, but one question remains unanswered: what is this The Platform really worth? The answer, unfortunately, is scathing: as many albums that have been expected too much, it is a cruel deception. The singles, "Work the Angles" - one of the best released in 1998 - and "The Platform" - a worthy successor - are there, and they are a good reason for buying the album. They are so superior from the rest, though, that they make the album's mediocrity quite obvious.

The Peoples' raps are precise; Babu is making fun with his turntable; prestigious guests are helping the trio (B-Real of Cypress Hill, Aceyalone of the Freestyle Fellowship, the Alkaholiks...); lots of producers are supporting them as well (The Alchemist, E-Swift, Kut Masta Kurt, T-Ray, in addition to Evidence). This kind of hip-hop, going back to basics and showing respect to the ancients, through samples from the likes of Jeru, De La Soul, Biz Markie, Big Daddy Kane or Showbiz & A.G., has the default of the purists, however. It sounds too industrious; it lacks the very authenticity it is seeking to restore. Its only merit is to remind people - if some still don't know this - that L.A. is not only about gangsta rap.