His name may not have made its way yet, out of the underground, but Aesop Rock's career is definitely on an ascending path. Three years after Music for Earthworms, and less than one year after a short but intense Appleseed – an indie classic, already – the MC and beatmaker from Boston has finally joined a real label, Mush Records. To show his confidence, he is releasing today no less than a double-vinyl album, Float. Also, as a proof of his growing notoriety, some indie big names are guest appearing there: not only Dose One, as on the previous record, but also Cannibal Ox's Vast Aire, and Slug of Atmosphere. 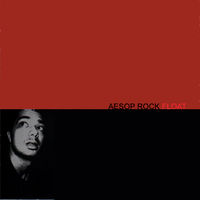 On this album, the beats are still fully on par with the rapper's sophisticated and literary lyrics. Produced by Blockhead, Omega – on "Skip Town" only – and himself, the music is expanding Aesop Rock's horizon. Less skeletal, more diverse, his songs are also getting more accessible, like with "Commencement at the Obedience Academy", a track that has been available for one year as a free MP3, and now stronger than the original, thanks to its saxophone.

Float's gems are often good at subliming Aesop Rock's monotone flow with strings. That is the case with the remarkable "Oxygen", a song without rhythm, but with sitars, looking like some movie soundtrack. This is also true of the slow "Basic Cable" – a criticism of television - , "Spare a Match", "How to be a Carpenter", and the anthological "Attention Span", with its basses and trumpets. Most of these tracks are sharing the same taste for crescendos and oppressive atmospheres, and for astute details, like the oboe on "No Splash".

Sometimes, the album is so diverse that it gets incongruous, like with the charming reggae of "Skip Town", the funk of "6B Panorama", or the Chinese-sounding "Garbage". Also, as nice as they can be, Blockhead's skits are sometimes useless and out of scope. And the country & western "I'll be OK" would just sound stupid, if Slug was not rapping – well, singing – on it.

Talking about other rappers featuring on Float, all of them are doing well: this is true of Vast Aire, on the above-mentioned "Attention Span", as well as Anticon's Dose One with "Dawsbridge", a great successor to Appleseed's "Odessa", where both MC's are rapping together - one with his duck-like pitch, and the other with his deep and serious voice - on some hallucinated oriental sound.

Float is meeting expectations, and pushing Appleseed's ideas to the next level. Its length makes it a less consistent record, but never mind: Aesop Rock is still a first-class rapper - and a solid beatmaker too, when he is moving behind the machines. His discography is already more impressive than many others, and Float is a great achievement, one of this year's best albums. So, is Aesop Rock the rapper of the year? Yes, definitely; in 1998, 1999, 2000, 2001, etc.