Kreayshawn, Lil Debbie, V-Nasty, Iggy Azalea, Kitty Pride and so many others… The new decade started with an eruption of female rappers, whose particularity, in addition to their gender, was their white skins. Truth be said, not all were memorable, and some have already disappeared from our radar screens. If one of them needs to be remembered, though, let's vote for Claudia Feliciano, a Mexican American who named herself Snow White - and later on Snow Tha Product - because her skin pigmentation appeared to be lighter than her Latina peers'. 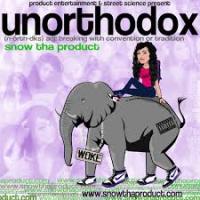 Born in California, Snow started to buzz around the year 2010, when she settled in Texas. By then, she recorded a series of tracks, and three of them, "Drunk Love", "Woke Wednesday", and "Holy Shit", were successful on the Internet. As often in such cases, it opened doors. Subsequently, the rapper connected with local figureheads like Z-Ro and Trae, and she collaborated with some other celebrities like DJ Paul, and Tech N9ne, with whom she's often been compared, because of her superfast flow. By the same period, she was courted by major labels – ultimately, she would join Atlantic – and she released two mixtapes named Good Nights & Bad Mornings, paving the way to an album targeted at a larger audience.

Even before that, though, in 2011, the rapper had self-released another album. It included all three singles mentioned above, and it was already quite satisfying. Unorthodox was its title, and it was a well-chosen one: Snow Tha Product, indeed, was clear that she didn't want to be a stereotype. She wouldn't deliver what was expected from a female rapper, or a Latina. More generally, the album's main theme was about self-assertion: Snow was ready for a fight, she wouldn't let people walk over her. Nothing new, there, in a hip-hop context; but at least she refused to mimic the invulnerable pose of your typical gangsters and bitches.

Snow was almost a feminist, but without the sermonizing moralism or the ideological stance typically going with it. Quite the opposite; the tone of her album was on a more joyous, light, playful, sexy and fantasist side, like with "Maria Felix", a track dedicated to the swag of the Mexican actress. Unorthodox was also full of funny storytelling, like with "Telemundo", a ritornello with mariachi trumpets about the rapper's boyfriend passion for telenovelas. Each song was ideally short, some barely going above one minute, and some would pleasantly whirr the walls of a discotheque. As a result, even the one boringly serious song there, "Like That", about relationship difficulties, was welcome on this overall enjoyable album.