Any major event, mechanically, engenders its opposite. By the end of the 90's, for example, when the bling bling posture triumphed in hip-hop music, others had decided to go the other way. They opted for political, responsible, adult or spiritual lyrics; they perpetuated the afro-centrism which had already characterized rappers like the Native Tongues. As a matter of fact, not too far from this famous rap collective, would emerge people like Mos Def and Talib Kweli, who would jointly found Black Star, and become heralds for the so-called "conscious rap" movement. 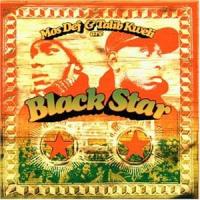 We feel that we have a responsibility to shine the light into the darkness.

Such started the album that both men had recorded jointly. Straightaway, they claimed that they were on a mission. They also positioned themselves as prophets, under the sponsorship of Marcus Garvey, the black Moses, whose Black Star program was supposed to bring the African-Americans back to Africa. Mos Def's and Talib Kweli's objective was to pursue this project: liberating the Black man, and offering an alternative to the excesses of gangsta rap. So, on "Astronomy", they glorified the word "black" itself. And on "Brown-Skin Lady", they sang an ode to the Black Woman, inviting her to get rid of the European beauty canons.

The other aim of this crusade was to fight violence; the same violence which killed the likes of 2Pac and Biggie, just a few months before. Both rap martyrs were mentioned on the first single, "Definition", a track influenced by Boogie Down Productions's "Stop the Violence". Referring to rap's veterans, coming back to the basis of hip-hop, or even to its Jamaican roots – just have a look at the cover art – were other designs, for both men. When they didn't quote KRS-One, they did so with Slick Rick, reinterpreting his "Children's Story". Our friends' references would even go beyond hip-hop, sometimes, like with the jazzy and splendid "Thieves in the Night", an extrapolation of a text from the black female writer Toni Morrison.

With its messages, the Black Star album could have been made only of some boring, preaching, and pedantic content, like so many conscious rap albums would in the future. It was more than that, though, thanks to its light crossover music, where real songs and reggae influences were not rare; thanks, also, to the extra musicality of Vinia Mojica's sweet voice, or the jazzman Weldon Irvine's keyboard; thanks, last but not least, to two major tracks: the above mentioned "Thieves in the Night", and "Respiration", a magnificent anthem to their home city.