One of the key labels of the late 90's indie rap scene was WordSound, a team managed by Spectre, a.k.a. Skiz Fernando. Mixing their strange blend of hip-hop with jazz and dub, and sometimes some noise attempts, they would please all kinds of experimentalists, for example those of the English magazine Wire, which made this label its main supply source for weird hip-hop, and went as far as offering one of its covers to its most emblematic rapper, Sensational. 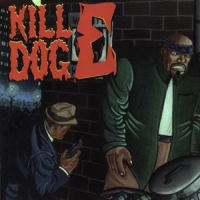 The raving records of this crazy MC spoiled by too many drugs, however, are not necessarily WordSound's main attraction. Let's rather focus on the first album of Scott Harding, a.k.a. Scotty Hard, a Canadian producer who, according to his press record, had collaborated previously with Kool Keith, Cypress Hill, Boogie Down Productions and the Wu-Tang, no less, and beyond hip-hop, with Vernon Reid, Björk and the Jon Spencer Blues Explosion.

No surprise, then, to realize that this beatmaker's perimeter was wide. We could hear that with The Return of Kill Dog E, a record fully aligned with the shabby atmosphere of the underground rap scene of this time, but which also offered more. Even though this LP was built around a single concept, the story of Kill Dog E, a gangsta who turned into a serial killer, leaving only 3 dice and a Bic disposable razor on the scene of his murders, it was extremely diverse; disjointed, we could even say; uneven; patched together from bits and pieces, without any internal logic, as so many other records released by the same label.

Without warning, Scotty Hard walked us from a jazzy bass or a shaking guitar solo ("Lurkin in the Shadows", "Raw Nerves"), to spoken word declaimed by some hip-hop version of Tom Waits, with an accordion ("Days And Nights Of Wine And Roses"). Also, we could hear bits of dialog in Spanish ("Muchas Olas"), or Sebstop, the main MC on this record, shouting on "Spittin in the Eye of the World". And of course, Sensational guest appeared, the time for him to share some lunatic rhymes on "Pockets Fat", along with messy bells, synthetic sounds and heavy drums.

It was often a bit too obtuse; it left us dubious, skeptical, or even flabbergasted. A handful of tracks, however, were supporting the whole album. They even brought it far, very far. The hoarse declamations and the fractured bass of "Modus Operandi: 456", all built as if they would spill at any time, were impressive. And the more standard "Who Said (What?)" made an impact as well, with it melancholic piano loop.

But if the album, today, is still relevant, this is mostly due to one single reason, called Antipop Consortium. Two members of the group were present, out of three, and they contributed to the best two tracks. The well named "Dark Blocks", first, with just Sayyid ; and most of all, with the same plus High Priest, the sumptuous "Bubble in the Haze", with its slow, ethereal and magnificent beat. For this track only, Scotty Hard, Skiz Fernando and WordSound deserve our eternal gratitude.