Quite recently, while reviewing the sales list for 2010 on the Access website, one could notice that the Living Legends were still monopolizing the top positions, with their most recent solo or collective projects. Truth be told, they are a bit at home with this online shop specialized in the backpacker rap genre. But still, this relative popularity is somehow surprising, considering that they release much too many records, and that their creativity is not exactly at its top. How is it that the aging Living Legends, up to this day, still look like the quintessential indie rap band? 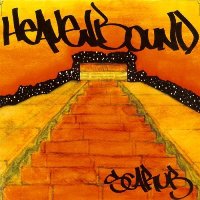 The answer is to be found in the albums their fans like the most, most released around 2000, and regularly mentioned as their classics, like Heavenbound. A closer examination of this record, ten years after, shows that it is overestimated – as the whole Californian collective is, actually. It is much too long, it includes a bunch of fillers, and as such, it is quite representative of the band's discography. And also, the beats, produced by the rapper himself, are not exactly outstanding.

There are some great tracks, like Complications", "Colorful Thoughts", "Wishful Thinking", and "Heavenbound", with piano loops fitting perfectly well the rapper's flow. Sometimes, also, some better producers than Scarub are providing beats, like Eligh with the delicate and jingling "Filling Space", and Omid, with the original flute on "Savvy Traveler". The Grouch also does a fine job with the Hawaiian guitar of "For What It's Worth / L.I.F.E.", as well as Belief with "Shadows", a duo with Amazon. Listening to the whole album in a row, however, can be exhausting, and even boring, with tracks like "One Love", "Audio", "Guessing Game", and "Good Times". Those are not appealing, they dramatically lack creativity and diversity.

And though, the album complies totally with the expectations of undie hip-hop fans. It represents perfectly well this grown-up kind of rap, deeply rooted into the African-American realities, but more matured, more presentable than others. With its life lessons, thoughts about men and women relationships going beyond the typical rap misogyny ("Shadows", "Wishful Thinking"), and words playing with oneirism and poetry ("Savvy Traveler"), Scarub plays the role of the street sage, the matured thug, the adult rapper. This respectable kind of hip-hop can sometimes be bold, but not too much, so that it doesn't scare boom bap fans. The guy raps well enough, he does the job, but he is never surprising. He rests on his laurels, and the founding myth the Log Cabin and 3 Melancholy Gypsys sagas have been.

The Living Legends were the most overestimated band in indie rap. In reality, they have been much more convincing live, than on records. Their best projects have been those from Eligh and The Grouch, the two white men in the group, the others being there for the African-American credibility. Nevertheless, each band needs reference materials, and Heavenbound, though imperfect, has played this role.