Dälek is not a newcomer. The group has sent us its impressive rap discharges for nearly 10 years. But as 2007 seems to be a busy year with the releases of the excellent Abandoned Language and the Deadverse Massive Vol 1 compilation, it was time for us to disclose this interview we recorded with the MC in March. 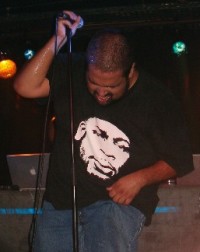 Apparently you’re starting a French tour and it seems you have lots of concerts here. Is it the case with other European countries or do you have a special relationship with France?

We have great support here, but we’re trying to go to as many regions as we can. This time it’s in France and Belgium, but later in the year we’re going to do other countries such as Austria, Germany, Switzerland, Scandinavia, and the UK. Before, we were trying to do all Europe at once, but this time we’ll try to concentrate on certain regions.

Do you have the same audience in each country? For example, is it the same in Europe and the US? Is this something you can assess?

I think we definitely do better in Europe than in the US. But this is very common for bands in general. There’s so much more appreciation for underground music here than there is in the States. People want to hear new things. People want to look for new sounds. We’ve been lucky enough to have people coming to our shows in Germany, in Scandinavia as well as France and Belgium.

So far I’ve seen just one concert of Dälek and I was impressed by two things. The first is your involvement on stage, the energy you give. Is it something natural that you give every evening? This is not the case of every artist.

It does not matter who comes out or who doesn’t. We always give everything we can. I’m not going to say that every show is intense. Everyone has an off-night. But if someone is paying money out of his own pocket, you need to have respect enough to give everything that you have. No matter if there’s ten people or a thousand in audience. Whatever, we always try to put out the same show every night. And I was also impressed by the energy of Oktopus. It’s not usual to have a beatmaker doing so many movements in a hip hop show.

Yes, I’ve been to a lot of hip hop shows and some of them sucked. There was some that I loved and some others where I thought I would better have staid at home and listened to the record. We always want to do something that is beyond what you have on an album, because anyone can listen to your record at home. If you have the chance to see a band live, it has to be something else, and something that moves you. And we love the music that we do. We love performing. That energy just inherits from the fact that this is a music that we really enjoy.

I was also impressed by the sound level. I was deaf when I left the concert.

Imagine us (laughs)! It’s a loud music, man. It goes with the live aspect. It needs to be heard loud, it needs to have impact. Otherwise again, what’s the point? If it’s going to be quiet, I just have to listen to it on headphones at home (laughs)! It has be something that hits you.

And I was surprised at the beginning of the show since we had many people who are used to Dälek concerts with balls in their ears. Then I realized…

I guess you’re also here to promote your album. I’ve just listened to it before coming and I noticed a big evolution since Absence. I found it less oppressive, less dark. Is this the way you see it?

It’s just a matter of perception. It’s less noisy than Absence, but I don’t think it’s less dark at all. There’s still this wall of sound. But it’s just a different approach, a new instrumentation and another sound. It would have been really easy to make Absence Part. 2. As a musician, this is not what I want to do. I don’t want the easy way. I want to keep pushing myself. I want to keep pushing the audience and music itself. There’s this perception that noisier is heavier. But I think that the composition on this new album is darker than Absence, especially when you hear it live. I’m very happy with this new album.

What about the evolution of the lyrics? Are they roughly on the same issues?

You know, people tell me: “you always rhyme about the same things”. But what has really changed in the world between Absence and now? Those things that I talk about are still fucked-up! Fix the world and I’ll stop rhyming (laughs)!

But I think that in this one there’s a more personal level to the lyrics. Absence was very straightforward, very in your face, very direct. This one still has this straightforwardness but there’s also another set of problems. It definitely deals with society, social ills and social walls. But it also deals with personal loss. It’s reminiscent of how I remember hip hop being, how I saw hip hop when I was a young kid. It’s denser, there’s definitely more room for interpretation. It’s more like our earliest stuff. The way I look at each record is that they are like we are at that moment. It doesn’t make this album in my eyes better than our earlier work. It’s just a representation of who we are right now. That’s basically the role of each of our albums. And I hope our music will continue to be that. So the next record may sound completely different from this one again.

You may know that many people in France do not really catch your lyrics. Is it a problem for you? I guess it’s a bit frustrating.

What I’m saying is definitely important. But there’s also what the song conveys in general beyond lyrics. People are still getting parts of the meaning even if they don’t get into the lyrics. And there’s also the fact that the lyrics are available on the website and on the actual artwork. They finally get into it because they like the sound of it. And as listens and listens go by, you finally catch little pieces of what I’m saying. That’s the beauty of music: the fact that you can enter it from so many different angles. Even if it’s not your native language, you can understand more and more layers of it. We play shows in Japan, in France and in Germany. Wherever! It does not have to be necessarily a lyrical thing. It draws you in. Music is a very primal and natural thing. It just connects anyone regardless of his background and his language. It makes you nod your head, it makes you feel something.

You mentioned hip hop in your old days. What would be your diagnosis of nowadays hip hop?

Who do you think about?

I would say that there’s just a lack of lyrics and quality MC’s in mainstream. But even that is a generalization. It’s not a new album anymore, but I think that Jay-Z’s Black Album showed that he’s a good lyricist. It’s possible to have mainstream music that’s good both lyrically and musically, even if it’s rare. I hope that the art of lyrics and emceeing will eventually be back again. To me, someone as Immortal Technique is lyrically ridiculous. What he’s doing is incredible. You know, rap will continue to take new forms, it will continue to take new shapes. Hopefully at some point the lyrical end of it will matter again. It won’t just be party rhymes. I’m not going to say that everything has to be political or socially conscious, but where’s the Bob Dylan of hip hop? Where’s the Leonard Cohen? Hip hop is still young, hip hop is only 30 years old. There are so many things that can still be done with hip hop. I think it will continue to grow. It will continue to evolve.

You also have a rock influence. How someone who grew up with hip hop got exposed to rock things such as Faust or My Bloody Valentine? Most of the time, you grow with one music or another.

I don’t think that’s necessarily true. Hip hop grew up out of DJ culture. And being a DJ has always been about being in everything. When hip hop was created in the 70’s or early 80’s, there was no hip hop to listen to. You had to create it. All the producers were listening to everything. Afrika Bambaataa was listening to Kraftwerk. And listen to early Boogie Down Productions records. There are rock samples.

Yes, but a large part of them were focused on black music such as soul, jazz…

Boogie Down Productions sampled "Smoke on the Water". Obviously that was not from a black band. The DJ culture in general was just about listening to whatever was out there and bundling the pieces that made sense to you. Of course, that’s not every hip hop group who listened to the Velvet Underground or My Bloody Valentine or Faust. But we’re hip hop in the purest sense. That means that we have that open ear. What has inspired us is wider and more varied. The beauty of hip hop has always been experimentation. You can have things different such as Public Enemy, A Tribe Called Quest, De La Soul, NWA, BDP, EPMD. Everyone had a different sound. Hip hop music encompasses so many different sounds. It was just recently when hip hop became so much more homogenized.

I’ve never thought that what we do is the only way that hip hop should be done. This is just my interpretation. This is just what sounds right to me. But at the same time, I can easily sit back and enjoy all different types of hip hop. There’s no reason why we shouldn’t be able to coexist with mainstream hip hop. There’s no reason why all these types of hip hop shouldn’t get more airplay. My only concern is that all the money goes behind something that only represents one part of hip hop. And then everything else is considered to be underground. That’s where the injustice lies. If there was more equal representation of everything that’s going on, including the mainstream stuff, I think it would be better for everyone.

Do you really think that the only reason for that is the choice made by the music industry? Isn’t it because mainstream hip hop is easier to listen to than what you do?

That’s something which works in cycles. There’s a certain sound that gets all the money behind it and that gets being player over and over again. Obviously that’s going to become the predominant form of hip hop. Every kid on the street who wants to get signed knows that he has to sound like this. But it’s changing. The kid finally gets tired of that sound. He wants something new. Some people don’t understand that hip hop wants to change and wants to become something else. You can’t put hip hop in a box and say “OK, this is hip hop and that’s it”. Hip hop has never been about constraints like that. So the more you try to do that, the more it’s going to change, the more there’s going to be some reactions against that.

Do you have any special message to France to close the interview?

Every time we get to France it gets better and better. I just want people to understand how much we appreciate their support, people digging what we’re doing, keeping to going out to our shows. That means a lot.