It was difficult to catch Busdriver this day. But finally we did it. I interviewed him with the help of a German journalist after his concert on the last day of the Nördik Impakt festival in Caen, Normandy. Busdriver was a bit tired after a whole week of shows in France, but he was kind enough to answer each of our questions. 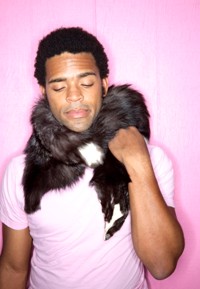 NB : questions from the German journalist are written in italic.

Are you happy with your show tonight?

Well. It worked out. It’s always difficult when there so much smoke, and fog, and light. It feels just like you were in the midst of a science-fiction film. But it turned out good for the most part.

Do you do lots of festival gigs or mainly clubs? I only know you through clubs.

Yes, I mainly do clubs. I’m pretty much strictly a club guy. But when I’m in Europe, of course, there are always festivals. So we do festivals. I like festivals. They’re so grand and out of proportion. I play wherever they tell me to go: clubs, birthday parties, offices… That doesn’t matter.

You already played in Normandy, haven’t you?

You played in The Bunker night club.

Yes! Oh, you remember that!

Are you happy with your concerts this week? It seems you’re in a kind of French tour at the moment.

Yes, a small one. This tour is just to be reacquainted with the French market. It worked well. We did 3 shows with Bonobo from Ninja Tune. There were a lot of things. It’s been interesting. I don’t know what to say. It’s usually good. And I brought another element to the show. I’m with Caural. He plays with samples. I’m very happy to bring him.

How do you actually develop your new style of music that mixes rap and hip hop with really interesting electronic music? How did it come?

It didn’t come. It just happened. Nothing is really pre-conceived. Friends I work with deal with that kind of music. It just get naturally incorporated into my stuff. I worked hard with my producer friend, Daedelus. People categorize him as IDM or electronic producer. But he’s also a hip hop one. I just got into it through that. It just happened to be. Caural, who does the music on stage with me, is very good at a variety of genres like IDM, electronic or hip hop. It all makes sense. You have to have access to everything I think, to some extent.

You have a new album that will be released in January.

Will it sound like that? How far will it be different from Fear of a Black Tangent, for example?

Well… I don’t know what to say. There’s a lot of variety I think. There are electro beats, or keyboard beats. There’s like a dance pop sound. There’s no regular Busdriver stuff. It’s different from Fear of a Black Tangent in that way. I think it’s a very good album.

Can you tell me more about your collaboration with Taktlo$$, who is my favourite german rapper?

Yes. I haven’t seen Taktloss in years. If you see him tell him: "hi". We saw each other in Berlin in 2001 or 2002. We played with Taktloss, we did shows with Taktloss. Actually Taktloss came in LA in 2000 by himself. He was in Hollywood and he walked all the way to South Central in LA which is like 15 miles to go to our studio and he said (Busdriver takes a german accent): "oh, hello, I’m Taktloss from Germany and I rap". He was very weird. That’s how he met him. Ha had a grant in Germany to go to LA and investigate hip hop. Then we did a tour with him. I like Taktloss. He was officially in our crew for many years. He was the German branch of the Project Blowed crew. He’s a funny guy. He’s very quiet when he says something. He’s a good rapper to, an amazing rapper.

Do you listen to German hip hop?

Do you investigate different hip hop scenes around the world?

Maybe the French one (he has a t-shirt with TTC’s Cuizinier on it).

Yes, in the French one, Cuizinier. Not more. I pay attention to the words people present to me. I don’t investigate that much people around the world.

How could I present Berlin hip hop to you, for example?

Send me a mail, I’ll check it out! I’m very keen on the Parisian hip hop scene, TTC, Para One, Tacteel. I like what they do very much. And they’ve been really helpful throughout few years. I support them!

Now you’re on Epitath, a more hardcore or punk label. I now that they signed Sage Francis and that they are getting more and more hip hop. But how have you connected with them?

In the recent years they put out a string of really successful indie hip hop albums: Sage Francis, Danger Doom and The Coup. And they were looking for more independent hip hop. I know that some of them didn’t do well here, but in the US it does pretty well for independent hip hop. I wanted to be with them. So I gave them something I was working on. And they decided to sign me. This is very strange because I’m a small artist relatively. It was weird. But I’m very happy. They’ve been a very good record label as far as now.

And what about your own label: Temporary Whatever. Does it continue?

Yes it does. I put out just recently a record of the group called Of Mexican Descent.

You’re speaking about the reissue of Exitos y Mas Exitos.

I have it, and I didn’t notice it was on your label.

Good! Yes, that what we did. But I don’t know what I’m doing next. I may put out the new CVE album. I have to see what it sounds like. I don’t know yet. We’re very proud of the Of Mexican Descent record. These are very important songs to me.

And in the past you released the Lab Waste album.

Yes. I wish I was able to find a label that would put that out. I know that the Lab Waste could do well. They wanted to have more presence in Europe. I’d like to do that for them. I think they’re a really good group and one day people will really start to appreciate them.

Have you listened to Thru, the last Thavius Beck album?

Of course! And it’s fantastic.

And what about the Subtitle one: Terrain to Roam?

Yes. They’re both very good. I think they’ll do a new Lab Waste album with me or with somebody else. Hopefully, that will do well.

What about your connection with Radioinactive? Is The Weather something you want to start again?

I don’t know. I really want to work with Daedelus more. He’s a good friend of mine. Over the years his methods have changed and he’s developed so much. I would really be interested in doing a record with him again. And with Radioinactive too, maybe in the future.

He’s in France as well at the moment. I saw him on stage last week.

Thanks to Sophie and Nördik Impakt for organizing this interview