Six years, no less, have spent between Endtroducing… and The Private Press. And they were more than sufficient to move from one era to the next. Now that the trip hop fad is over, and that DJ Shadow's rap roots are fully recognized - thanks to the multiples releases and rereleases of his Quannum collective, and to the arrival of a new generation of indie rappers influenced by him, at least indirectly - it was time to confirm the excellence of Endtroducing… with a brand new album. 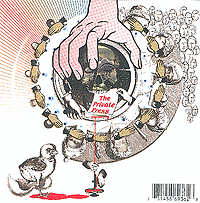 There were good reasons to be anxious, though. The best Quannum releases, actually, had not necessarily been the most recent, but maybe more old tracks like on the Solesides Greatest Bumps compilation. Like with the slightly disappointing Spectrum, DJ Shadow could have multiplied crossover tracks or useless guests – people like Jurassic 5 or the Souls of Mischief, whose best days are passed. Like Blackalicious with Blazing Arrow, he could have made some boring adult rap. Or he could have overplayed his role, like with the UNKLE project. The Private Press has just been released, and it could have been any of these options; but it is none.

Actually, it is quite the opposite: an absolute success. Though it seems more austere and less munificent than Endtroducing… was, it is strong and homogenous. This time, no banger like "Organ Donor" or the melancholic "Midnight in a Perfect World". Only "Six Days" and "Blood on the Motorway" - a song looking like Van Morrison's - can be considered as catchy, maybe because they have sung lyrics.

As predated with "You can’t Go Home Again", however, most of the album is made of instrumental tracks, and brilliant ones. Many are psychedelic, and most are less sensuous than in the past. They even look quite similar to Britain's Req, like with "Monosyllabik". DJ Shadow's haters, those convinced that he is somehow the hip-hop counterpart of the prog rockers of the past, may still point out a sample manipulation style too much founded on virtuosity, or too sophisticated beats. But all should admit that DJ Shadow's works are now less emphatic than previously.

Six years of silence, at least as a solo artist, could have meant two things: a critical lack of imagination, or an overly perfectionist approach. By chance, the second hypothesis seems to be the right one. DJ Shadow convinces with this accomplished album, which entirely deserves the same status as Endtroducing….