Assuredly, the people present at Buck 65's first concert in France, we organized six months ago in Paris, won't forget this strange one-man-show, during which the Canadian rapper declaimed rants and fantasies on pre-recorded sounds, with a bit of theatricality. Also, they surely remember the brand new beats he disclosed there, among a few reminiscences from Vertex and Man Overboard. These were exciting appetizers for his next album, his very first released by a major label. 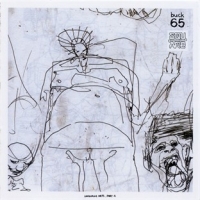 This new album, here it is, and its title is Square, since it is supposed to be the 4th installment of the Language Arts series, Buck 65 started a few years back, by the times of the Sebutones. Four is also the number of tracks on this record, each approximately as long as a vinyl LP side, and named "Square 1", "Square 2", etc. in the same anonymous way as the untitled tracks on Man Overboard.

The album, though, is not a collection of endless and convoluted tracks. With each of them, actually, the rapper and beatmaker delivers a full set of short songs, mixed with each other, with the help of scratches and instrumental transitions. And he raps on each of them, which a voice which is getting breathier with time, sounding more and more like Tom Waits'. As a matter of fact, Buck 65 offers something very close to his first Parisian concert. Square looks like the mixtape of his dreams, like some kind of musical fancy, he feels perfectly free to ramble on.

Square looks like a draft, and this feeling is only strengthened by the cover art, with its scribbled drawing in black and white. Buck 65, however, did not botch his first album for a major label; he definitely didn't. Each time on these tracks, each of their micro-songs, is a gem. They are the mark of an uncommon and inexhaustible creativity, each of them having been completely made by Buck 65 alone – except for the slight contribution of a few others, most notably DJ Signify. While some are desperately trying to find one true idea per album, he collects them with ease; he even has no time to really develop them, to make them last.

Prodigality and eclecticism are two major characteristics of Buck 65's music, and now more than ever. From the scratches and church organs of the first track, through the splendid acoustic guitar a few seconds later, a catchy piano on the next track and a few electronic blips here and there, he always finds the right loop, the right sounds, and the right background, for him to share whatever crosses his mind. His subject matters, indeed, are as diverse. His lyrics can be lighthearted ("food puts me in a good mood"), sententious ("science is all of the above"), melancholic and poetical ("her name reminds me of the stars"), or anything else.

But let's stop with these comments. It is now time for you to discover these 4 tracks, each one as satisfying and rich as a full album. As for those who have already listened to Square, it is now proven: these days, Buck 65 is the greatest.