The beginning of the year 2001 has been quite unsurprising. The same day, hip-hop’s two most anticipated albums came to our ears, and came up to all expectations, setting to reach the top ranks in our end-of-the-year playlists. In the US, The Cold Vein gathered what Vast, Vordul and El-P could do best. Here in France, within only ten tracks, Asphalte Hurlante (Screaming Asphalt) by La Caution annihilates and destroys all at once the much too self centered French rap scene. 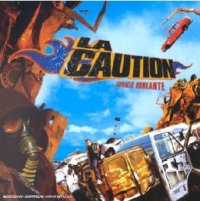 The two brothers / emcees, Hi-Tekk and Nikkfurie, can ridicule "plain" French rap easily, all the more so as they share the same roots. As the title of the album suggests it, the themes that will be treated (usual problems, life in the hood, blunts, alcohol (when you’re driving), their Moroccan roots) are not so far from those we hear in everyday rap. But these two guys carry them away, transfigure them, magnify them, through daring metaphors full of trivial references and involved discourse. It seems that whatever they say, they just say it better. All of their lyrics are written in the same kind, often quite obscure when you hear them for the first time, but luckily transcribed in the leaflet. Unleashed, Hi-Tekk and Nikkfurie declaim their pamphlets keeping their words away from sound militancy, and preach their sermons devoid of base aspects of conscious hip-hop. Moreover each of them uses his own system of reference : science fictional for Hi-Tekk and a more prosaic style for Nikkfurie; they also take advantage of their cutting flows they obviously grinded on the stage : the former has a grave and doom-laden voice, whereas the latter has a higher and sharper register; to cut a long story short, they are perfectly complementary.

And the same goes for the music : Nikkfurie produces when DJ Fab does the cuts and the result is an ample and ambitious sound, largely electronic, as the marvellous "Les Rues Electriques" foretold it. Miles away from the usual "I’m doing the beats Premo does on this guy’s mixtape" or the "I sampled Mozart" habit which 135 out of 136 French beatmakers enjoy having. Million miles away. Each track in Asphalte Hurlante is like a futuristic gothic cathedral : highly detailed, complex as well as evident, both wonderful and disturbing. Even "Les Rues Electriques" is ill-treated, mixed, built up and down then down and up in its upsetting sequel : "Toujours Electriques".

Nevertheless, La Caution allow themselves a few digressions, without which the album would quickly become exhausting. A little sweetness is added to the meal, with Taïro’s attractive and ear-catching chant on "Changer d’air". They also bring their mates Les Cautionneurs (Profecy, Izno, Saphir, 16s64) on the efficient "Entre l’index et l’annulaire". However it happens the missiles miss. The album doesn’t reach full speed on each track, once the hits at the beginning are over. Sometimes too thirsty, our three men stumble over their rocky ambition. On Culminant for example, as the name announces it (Culminating), should be the climax of the album, but there’s something missing. Happily enough, Asphalte Hurlante comes to its end with "Comment on t’voit", one of the best tracks (with "Aquaplanning") followed by a great instrumental track.

Perfect albums don’t exist; even the most critically acclaimed classics aren’t perfect. And Asphalte Hurlante isn’t either. But it doesn’t avoid its destiny : being the greatest French hip-hop event of 2001, unbelievably (nearly unexpectedly) bridging the gap between the ultra-conservative French scene and the lovers of unidentified sound objects. Both the achievement of rap from the streets and the foreword to a new era of French Hip-hop.