The existence of a Christian oriented hip-hop subgenre being now granted, in the US, it was only a matter of time before someone really talented would emerge from this. Such a guy, actually, does exist. He is coming from Portland, Oregon, his name is Braille, and in 1999, when he was 17 only, he released Lifefirst: Half the Battle, an album that many praised, in the indie scene. This scene being now made, for a large part, of White middle-class boys concerned with hip-hop's respectability, and hostile to its more materialistic tendencies, it just made sense that they would enjoy this more spiritualistic approach to their favorite music. 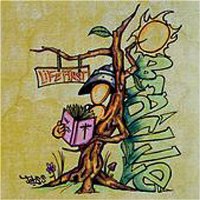 However, even if a large part of it was dedicated to Braille's personal relationship with God, Lifefirst: Half the Battle was still, primarily, an underground hip-hop record. The many beatmakers, actually, included some key players in the indie world, like Celph Titled – who produced the great "Ink Blotch" – and also some experimentalists, like Anticon-affiliates Sixtoo and MoodSwing9. The other ones were Deeskee, DJ Kno, or less famous beatmakers like K IV, Big Balou, and Kiilani.

These people were showing a particular taste for acoustic guitars – please notice, in this style, the excellent "Hard to Determine") - or for some strings ("Sister of Change", "Gullet Gambit") and flutes ("Delusive Decorum") spread here and there, in a discreet and subtle way. Or sometimes, they were trying themselves to more experimental sounds, like Kiilani, with the Hitchcock sample "Molasses".

As for Braille, he never delivered the dumb and pious lyrics one might dread. Even if he could play the preacher, or profess his gratitude for Jesus with his rather low profile voice, his flow was precise and impactful, and sometimes he could sound more hardcore. The main religious trait on this album, finally, was the frequent use of ethereal samples. Because of them, Lifefirst's music sounded gothic at times, and not too far from the first opus of the Jedi Mind Tricks, but with a less sacrilegious stand, obviously. Not a bad idea, since this formula was the basis of two of the best tracks on the album: "Antfarm" and the fantastic "Homesick".

Obviously, for people as secular and irreligious as we - French guys - are, Braille's Christian militancy was sometimes embarrassing. But after all, since we got used to the virulence of gangsta rap, or the excesses of the horrorcore style and people like Necro, why not cope with the bigotry of this other underground rapper? As we know – and as the detractors of hip-hop don't – we don't have to subscribe to the lyrics. Let's just enjoy the music which, apart from some weak and lazy tracks like "Gullet Gambit" and "Abandoned Island", is just great. And at the end of the day, we will only care for one thing: Braille is a great rapper, and his beats are great.