The reason why Beneath the Surface is so crucial a record is, primarily, historical. Discovered by many on illegal download websites, where albums from the likes of MF Doom and Non-Phixion were also available (along with Anticon's very first releases), it had just predated the heyday of indie hip-hop, by 1999 or 2000. It was also an important glance on the late 90's West Coast Underground scene. 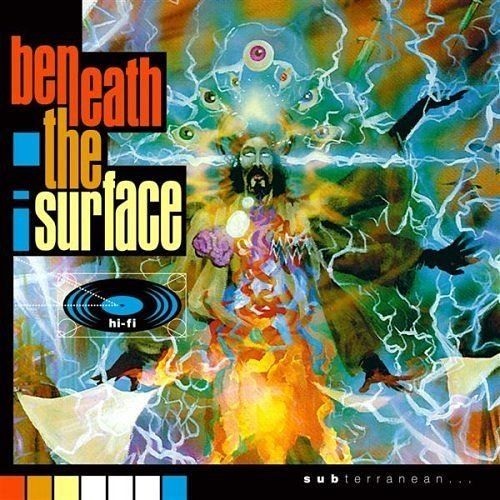 The guys on the record didn't come from nowhere. Four years after the mythical Project Blowed compilation had been released, this was, somehow, its reloaded version. Some of the same rappers were still in, like Ellay Khule, as well as the scene's godfathers, the Freestyle Fellowship, at their very best with the outstanding "When the Sun Took a Day Off and the Moon Stood Still". This new album, though, was mostly dedicated to the second or third generation of the movement initiated close to 10 years before, at the Good Life Café; a generation which, all over the 2000's, would release some of California's finest indie records.

Released on Daddy Kev's defunct label, with a colorful cover art from Mear One, Beneath the Surface was primarily a compilation, aimed at advertising the talent of obscure acts like Afterlife, the Hip Hop Kclan, the Shapeshifters, Of Mexican Descent, and Global Phlowtation. On this record, most would hear for the very first time Awol One's warm and erratic voice, or Circus demonstrating his strange, haunted and nerdy kind of rap, on "Night and Day"'s sweaty organ beat. Here, the big Xololanxinxo, supported by some others, revealed the same taste for guitar beats, as with his acts Of Mexican Descent and, later on, Toca. Beneath the Surface was also a new opportunity to be impressed by Ellay Khule's crazy flow, highlighted on "Sunny Side Up" by a contrasting and crepuscular ambiance.

There was another reason, though, why this compilation was so great. And this reason was, curiously, that it was not really a compilation… In addition to revealing some new names, it was solidly built, exactly like an album. It had a value in itself, and it needed to be tasted and experimented as a whole. It was rich, with no fillers. And it aged very, very well. The reason for such a consistence, such a homogeneity, stood in one name: Omid Walizadeh - by then still called O.D. - one of the greatest unsung production heroes of the Californian hip-hop scene.

Omid transformed what was supposed to be just a compilation, into a true hip-hop masterpiece. He did it thanks to a wide area of quite unusual sounds: Native American chants ("Beneath the Surface"), sunshine pop ("When the Sun Took a Day Off ..."), Indian or oriental music ("Hazardous Curves"), and even easy-listening. A true hip-hop beatmaker, he was good at playing with minimalistic loops ("BustMustJustUs"), but more often than not, his work was more subtle and complex, more musical, like with the harp of Vixen, Slant & Puzoozoo Walt's "(In)sense", or the violins of H.I.M.N.L. & Tyliana's "For her Souly, Slowly, Solely".

In Omid's hands, Beneath the Surface was a complete opposite to the grim blackness associated with New York's underground hip-hop production style. It was as versatile as the raps of its guests. This flexibility and resourcefulness had always been latent with the Project Blowed, but Omid pushed them to their apex, subsequently providing one of the very best album ever recorded by these folks.