Assessing a musical genre on moral criteria is sad; it is simplistic and narrow-minded. Most often, it means setting useless boundaries, spoiling one's pleasure, and, basically, missing the point. However, it is legitimate. Among so many other things, hip-hop is rich with lyrics, images and meanings. For better or, more frequently, for worse, in the US or elsewhere, it often intrudes into public debates, tearing apart those who consider it is a disaster, morally speaking, and the others. 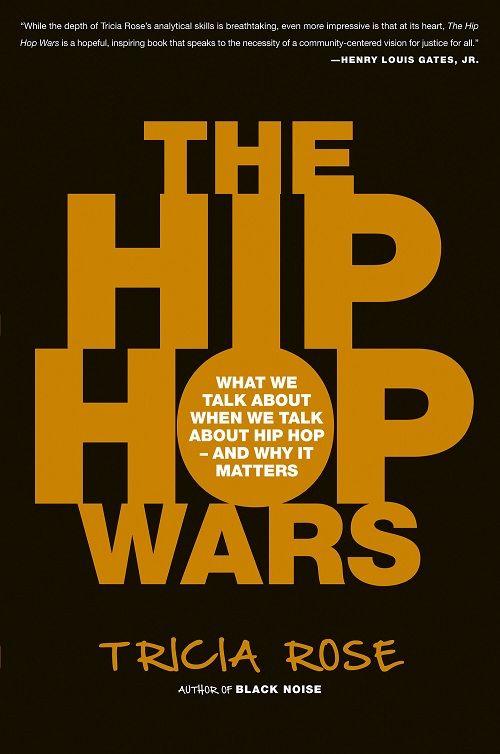 Tricia Rose is a professor of African Studies at Brown University, Providence, Rhode Island. She is also the author of an important book about hip-hop, published in 1994, Black Noise. A decade later, she decided to engage into the rap debate, or the hip-hop wars, as she calls them. She did not choose side, though, but decided to analyze the arguments of both camps: the detractors of hip-hop, those who accuse it of inciting to violence and spoiling the American values, or the status of women; but also its defenders, those who think that rap only reveals the realities of the American society, or more particularly the African-American one.

In her book, Rose dismisses both camps. The detractors of rap are, according to her, coming mostly from the retrograde side of America. Their criticism of hip-hop is only renewing old racist prejudices and clichés, related to the Black community. But she also criticizes the supporters of rap, whom she considers equally blind and irresponsible. She believes that both factions are finally playing a similar role: promoting a negative and degrading image of the African-American culture.

Truth be told, rap has significantly changed, since the time when Rose supported it in Black Noise. By the beginning of the new century, a kind of hip-hop supplanted all others: the gangsta one, in its most extreme, dirty and immoral form; a sort of rap which would be limited to the mindless celebration of a harmful trinity: the gangster, the pimp, and the ho. According to the author, this is a perversion, a cancer, an evil thing. By comforting all the old fantasies and prejudices about the Blacks, it is ruining past efforts for emancipating the African-Americans.

In order to address this, Tricia Rose would like to promote other forms of hip-hop, she considers as more progressive, more positive, and more respectful of women; forms which have been marginalized over time, and rejected into the underground. She is not against an ardent and protesting kind of rap. But she wants it to be more constructive, and less complacent to the worst weaknesses of the human kind, mentioning the likes of Mos Def, Jean Grae, and Lupe Fiasco as potential role models. By the end of the book, she goes as far as listing a set of initiatives she considers as worthwhile, and on par with her own agenda.

This stance is the same old song. This is the usual fight between the Ancients and the Moderns; between the supporters of conscious hip-hop and the fans of gangsta rap; between the educated urban centers à la New-York, and the more carnal and libidinous Dirty South. Tricia Rose - nothing surprising with an intellectual located in New-England, also a mixed-raced person, possibly torn by her dual identity - is just formalizing the point of view of the first camp; the camp which lost.

Tricia Rose seems to attribute the defeat of progressive over ignorant rap to some conspiracy from the entertainment industry. According to her, record companies would have snubbed the conscious rappers, preferring to promote gangsta ones, considered as easier to market. By doing so, the author is using the argument of all losers: she is blaming others. The failure of intelligent rap would be attributed to the usual scapegoat of the leftists: the corporate America, the big business.

There lies one of the book's mistakes. The industry, actually, has not welcomed gangsta rap. It finally used it, but under market pressure. As usual - meaning quite late - it just followed trends set by fans. People like Jerry Heller and Jimmy Iovine had to fight against peers, so that gangsta rap's sales potential was recognized. And it is thanks to small labels like No Limit and Cash Money that all rap finally turned über-gangsta. The industry, in reality, likes to polish its rappers. Even when they go the gangster way, commercial rappers need to display well-thought social content. Just refer to the recent hype around Black Hippy.

Tricia Rose is using old arguments: she is setting a so-called underground - which would be sane, pure and conscientious - against a perverted, demagogic and amoral mainstream rap. The reality, though, is more complex. The underground she is talking about, actually, is just one underground among many others. It is even not a real underground; it is indeed largely sponsored by mainstream media, and by the industry itself. Many of the rappers she is listing as role models, are on major labels. To the contrary, the underground is full of paroxysmal gangsta releases, and rappers exploring to the extreme the esthetics of evil. One just has to compare the underground mixtapes of some well-known artists, to their more civilized mainstream albums, to realize that the book's core theory is flawed.

This truth is hurting Rose, a scholar, whose purpose is to promote the African-American community, and to save it from stereotypes coming from the slavery and segregation times, but the gangster, pimp and ho trinity has actually been created by the Black community. It even existed before rap. in the 60's and 70's, in novels from the likes of Iceberg Slim and Donald Goines, or in Blaxploitation movies, which were all Black works, made by Black people, for other Black people. It was not just White fantasies aimed at young White guys living in the suburbs.

Others points in Rose's book are highly questionable, including its very fundament: the assumption that gangsta rap would have an influence on its audience. Some people, it is true, may take hip-hop's clichés at face value. The author is mentioning some examples among her own students, White fans of rap, who believed that this music was a reliable reflection of the African-American social realities. As a matter of fact, the rapper J-Zone, in his own book, had admitted he had made his own the sexist and homophobic mentality of rap; and that he didn't believe that all rap fans were able to enjoy it with a distant and critical view.

But how much does such an influence really operate? In reality, we just don't know, and Tricia Rose neither. Her thesis is based on no study, no proven fact, and no number. She just relies of a handful of examples, and her own feeling. Against her, we can quote others, who affirm the complete opposite, for example Dan Charnas (The Big Payback, 2010) and Steve Toute (The Tanning of America, 2011), who pretend that hip-hop, despite its bad reputation, contributed like no other to the ascent of Black people; that no-one can be less racist than a rap fan.

The author is opting for an easy position: the arbiter's, the judge's. She wants to be equidistant from the reactionaries who despise rap, and from its numbest fans. But one could do the same with her, and chose to lump together the first party, and Rose's own. One could present them for what they are: two sides of the same coin. Both kinds of criticisms of hip-hop, indeed, the conservative and the liberal, are built on the same postulate. They overestimate the message; they consider that rap would be, inherently, the musical translation of the Black social realities; that it would be its spokesperson, or perceived this way. But is this really true?

Rose explores in many ways the relationship between hip-hop and its audience. She questions its impacts on both its Black and White fans. She wonders about what it says about the African-Americans. But she omits the fourth question, arguably the most important: what does rap say about the White majority? What does it disclose, regarding the young middle-class people who are its consumers? What does their fascination for the hip-hop trinity say about them? What do they find satisfying in the outrageous display of gangster, pimp and ho characters?

Music, as all cultural expressions, belongs to the world of dreams and fantasies. It is, mostly, a matter of escapism. It offers ways out to people; it helps them to flee from their trivial lives and the heavy weight of social norms. The success of the most absurd form of gangsta rap demonstrates, actually, that what won is its complete opposite: an excessively moral society, where sexual urges are under control, where gender equality and the normalization of homosexuality are, if not fully realized, at least largely accepted moral obligations; in other words, a society where the progressive precepts advocated by Rose have become a norm.

She is perfectly right, when she considers that rap is, in part, a reaction to progressive values. Rap is an asylum, providing people with the pleasure of the forbidden; a pleasure rendered stronger by its rooting into the reality of the Black ghetto, a world perceived, rightly or wrongly, be it true or not, as parallel to ours.

Tricia Rose, actually, is suffering from the pain of people who just discovered that their lovers are, in fact, different from what they dreamed they were. Negating its strengths and originality, she would like to entrust rap with missions that, traditionally, the elite wants to give to cultural movements: as the little Red Guard that, ultimately, many leftists are in their heart, she would like to change it into a propaganda channel; or, on the opposite, she would like it to be pure art, something exclusively focused on its esthetical side. Tricia Rose, finally, would like that hip-hop goes the jazz way, that it becomes something clean and respectable, on par with the liberal standards of its time; in other words, a dead music.