Considering the Hieroglyphics background, and the critical success they encountered with records like I Wish my Brother George... (1991) or Fear Itself (1994), and of course 93 ‘til Infinity (1993), big magazines like Rolling Stone or The Source had no option but reviewing the first joint album from the Bay Area collective, made of the Souls of Mischief, Del tha Funky Homosapien, Casual, Domino and The Prose. Their feedback had not been too positive, though. And in France, where the record had been broadly distributed, it would become a favorite of discounters, who would sell it for almost nothing, just to get rid of their stocks. 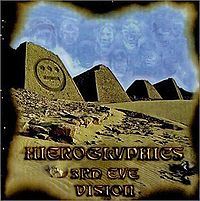 As a matter of fact, by 1998, the Hieroglyphics looked a bit passé. Most of them had been dismissed by their record companies. And it was precisely because of this situation, that they had decided to fund their own label, Hiero Imperium, and to release Third Eye Vision, an album emblematic of the indie rap explosion of the late 90's. This record, actually, is considered nowadays as a lost classic, by many, and maybe it had been the last really great record from the Hieroglyphics.

Usually, super-groups are a disappointment, especially when they deliver their output on records 70 minutes long. But in that specific instance, all nine rappers benefited from their number. They provided the record with variety, from some solo tracks – named according to the rapper – to others where they engaged in all kinds of collective exercises: choruses, dialogs, or battles. What they delivered, also, was a synthesis of everything great they had done in the past. It was their specific sub-genre of West Coast alternative hip-hop, closer to East Coast jazz rap than to California gangsta rap, but leaner, funkier, more playful and creative, and less sermonizing than New-York's sometimes martial and linear boom bap.

This album was typical of the first years of indie rap: the beats sounded modern, the music was a continuation of the 90's style of production, and the Hieros proved to be literate rappers, talking about Imothep, Socrates, or Moorish era Spain. But with its ego-trips and battle styles, its stories about girls, and by talking only implicitly about serious topics like the Black condition, on "One Life One Love", Third Eye Vision was also leaning toward the Old School. It went back to hip-hop's fundamentals. This desire to come back to some kind of lost age was obvious, when a great Del delivered the following rhymes on the excellent "At the Helm":

Obviously, this record was all about the traditionalist side of indie rap. But with the Hieros, it sounded fresh and relevant, thanks to great tracks like "After Dark", "Oakland Blackouts", and the suave finale "Miles to the Sun". All of those songs would make clear why Third Eye Vision deserves to be praised as a cult classic.