By the year 2000, the indie backpacker hip-hop style had spread over almost all places in the United States, except maybe its Southern parts. Essentially, the most popular form of hip-hop, there, was its complete opposite: it was dirty, sexual, gangsta, and aimed at clubs. It had so few to do with New-York and its boom bap heritage. In the Dirty South, actually, only a handful of rappers in Florida could, more or less, be related to indie rap; plus, of course, the CunninLynguists. 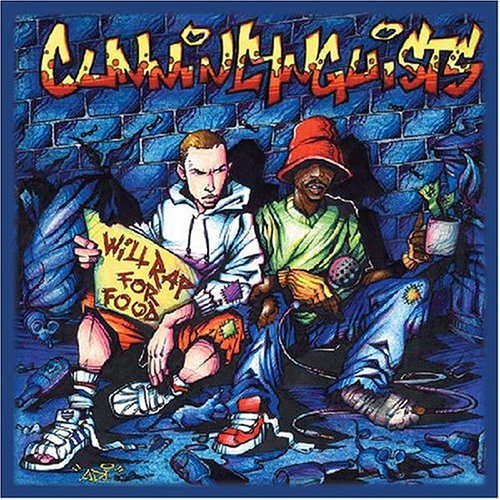 When they started, this group from Lexington, Kentucky – a State located just at the limit between the North and the South – had only two members, the rappers Deacon the Villain, and Kno (originally from Georgia), who was also taking care of the beats. Together, they imported some East Coast hip-hop flavors rather far from their cradle, perfecting the arts of scratching and sampling, opting for astute punchlines, and for lyrically agile and meaningful raps, as indicated by their name.

Per the indie ideology, the CunninLynguists despised mainstream rap. The ironic title of their first album, Will Rap for Food - they found in a video from Dr. Dre, where he was mocking his rival Eazy-E - showed it, as well as tracks like "Funkinwichu", where the duo made fun of the Cash Money and No Limit labels, and "Thugged Out Since Cub Scouts", where they ridiculed gangsta rappers.

Will Rap for Food was full of sarcasm, but not only. The CunninLynguists also liked lighter and more playful raps on "Lynguistics", "Halfanimal", "Takin' the Loss", with Jugga the Bully, and the posse cut "616 Rewind", with Tone Deff, Sankofa, Kashal Tee and Celph Titled. And some other songs, on the opposite, stroke a sensitive chord: "Mic Like a Memory", about the role of hip-hop in these two guys' lives ; "Missing Children", with Braille, about the death of some beloved ones ; and "Family Ties", about unworthy parents who dismissed their responsibilities.

The album's key strength was Kno's work with the beats. He might have been less strong a rapper than Deacon, but his sounds were outstanding, and full of ideas, like the furious cords on "Lynguistics", the Common sample on "Mic Like a Memory" or the Eminem one on "Halfanimal", the accordion of "Thugged Out Since Cub Scouts", the almost trip-hop "Not Guilty", the sepulchral song on "Missing Children", and the drum'n'bass conclusion of both this track and "Takin' the Loss".

Compared with these, the sounds of So Live!", the album's main single, produced by Celph Titled, were a bit tedious. Not surprising, considering his talent with beats, that Kno would focus on his production duties when Mr. SOS, and then Natti, would join the band, helping the CunninLynguists to become one of the rare long-lasting and well-known indie bands, in the greater hip-hop landscape.