It is, in some way, Ozone Music's forgotten classic. This album, indeed, didn't make its way, beyond a small clique of rap connoisseurs. Overall, the critics, including generalist ones, had been quite positive when The Sanity Annex had been released. But Sonic Sum never became as famous as some colleagues coming from the same scene, despite Rob Sonic joining Def Jux, a bit later. 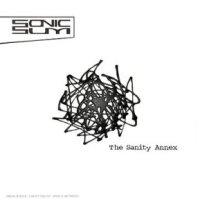 This band, however, had much in common with Company Flow, Antipop Consortium, Saul Williams, and other Nuyorican Poets Café regulars: they liked futurism, abstraction and experimentation. They looked like Mike Ladd, sharing with him his taste for hallucinated rap poetry, slow tempos and filtered voices ("Sara-Inge", "Eratika"). Exactly like him, they liked to give way to subtle soundscapes, or Eastern-sounding samples ("Flatlands"). By listening closely, one could also notice some similitude between Rob Sonic and Breezly Bruin of the Juggaknots, with this typical way to drop his voice at the end of each verse.

But Sonic Sum also had its own strengths. With no less than 4 beatmakers (Erik M.O., Fred Ones, Jun, and Rob Sonic himself), the band paid a close attention to its sounds. In addition to the synthetic music on the record, they added live instruments, like flutes, guitars, and some bass played by Erik M.O. himself. With Rob Sonic singing on some hooks, The Sanity Annex was unusually melodic, for a rap record, and could have appealed to more people than the usual indie rap fans.

It was full of highlights, like the fantastic and introductory "Velour 80 Grit", the oppressing "Flatlands" and the equally dark "Sky Pirate". The smooth and moody atmosphere was either enjoyable ("Callarama Gala", "It’s an Ashtray"), or fabulous ("Salad Fork"). And the weirdest moments worked well, as with "Anaesthesia Make Believe", a track sampling bird songs. As for the very atmospheric bonus track, available on a special edition of the record, it was no less than remarkable.

Due to some weaker songs ("Window Seat"), or because it was sometimes too soft ("Eratika", "Sara-Inge"), this record could sound soporific to some. Too neat, too slow, and devoid of guests, The Sanity Annex dangerously flirted with boredom. It was less blazing than some other records, released by Co-Flow or APC. And precisely for this reason, this indie classic staid reserved to the happy few.