By the early 00's, the indie rap scene was so crowded that only a few critics had identified this album. Like so many others, Komadose got lost among the multiple Company Flow clones flooding the underground of these times. Beta One, truth be said, was dangerously close to plagiarism, with its austere science-fiction hip-hop, its suffocating scratches, and its abstract and haunted kinds of lyrics. 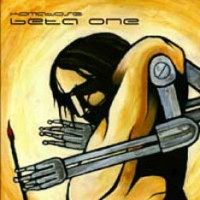 The main difference with its model, was the number of rappers and beatmakers involved. They were plentiful. Among them, only K-the-I??? would become more or less famous, due to his solo career afterwards. KaeoFLUX, this project initiator, would work with Zucchini Drive later on, and BrokenKlutch and OptimisGFN would release some records, some hardcore indie rap fans would hear about. But all the others, Pilot Balloon, Digistance, TheButterflyswift, PregnantWaterRock, Polymorphik, Jud, Str8-A, Safe905, WepOne and Strategist, were - and are still - completely unknown. Together, though, despite their number, they had all been entirely focused on one single project: emulating and pursuing the sound of the famous Brooklyn's group, moving on the same ground, and digging even further.

Everything, on Beta One, reminded the heralds of the indie rap movement: "Pulsar Star", for example, with its weird sounds, abrasive lyrics, and heavy rhythm; or Optimis and Butterflyswift's "Lava Death", with its typical stumbling beats. And when the album stopped reminding Co-Flow, it looked like their colleagues, the Juggaknots, as with Safe905's jazzy "The Human Race". Overall, this record looked so much like a copy – notwithstanding the ugly cover art – that it wasn't engaging.

Perseverance would pay, though. Over time, Komadose's unique album proved to be worth any solo album from El-P or Bigg Jus, as if this Boston group had stolen some sacred fire from them. Their hard beats were impressive, especially when they mixed with almost imperceptible melodies, like with "The Cessation of Samsara", with KaeoFLUX and K-the-I???, or Polymorphik's "Preserved Graphics".

The weak tracks were rare. Optimis' CockyMF9" was one of them, maybe, due to its lazy loop, and BrokenKlutch's "Murked Out", which flirted too much with rock'n'roll. And "Nova Solar Search" announced the most boring moments of K-the-I???'s solo career. But these were exceptions on this record, which proved marvelously that, as far as music is concerned, copying does not mean betraying.