50/50 Where It Counts is a decisive record. It is a reference for the Halifax scene, for Canada's hip-hop in general, and for the late 90's indie rap. At this time, in 1998, both Sebutones were already central members of Nova Scotia's capital city rap scene. But afterwards, they notoriety would rise further, and their careers, though quite different, would be exemplary. Sixtoo and Buck 65, though, do not seem to agree with the praises addressed to their joint effort. The impact of this album, recorded in only two weeks, has seemed something astonishing to them. 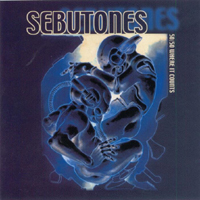 In the 2000's, while Sixtoo would refuse to comment his musical past, especially with the Sebutones, Buck 65 would consider on his own website – in a series of reviews where, basically, he denigrated all his previous records – that this album, the only one the duo would deliver after the Psioriasis cassette, had been botched, that it was badly recorded, that it was much too long. This was not entirely false. And anyway, how could one take seriously a record starting by a booming "Let's fuck! I'll fuck anything that moves!", and closed by a "Punk Song" where Buck 65 declared that everything disgusted him? In this one comment about his album, though, he admitted that it had at least one strength: it was full of ideas.

Some heavy beats, a paranoid feeling and an apocalyptic ambiance, science-fiction lyrics, old movie samples and the monotonous flow of both MCs, made of 50/50 an oppressive and monolithic album. Considering this, and the fact that, indeed, it was pretty long, it wasn't really an accessible one. And though, this record would be less iconoclastic than some others, which both Sixtoo and Buck 65 would deliver over the next decade. After years of rap activism in their isolated city in Nova Scotia, both men were still loyal to hip-hop's principles: loops, scratches, uncompromising flows, and some diss tracks, were making up most of the album.

The Sebutones would not cross the border of the hip-hop genre; not yet. But they were incredibly inventive and creative, in terms of sounds. To take just a few examples: "We Three Kings" plaid with the deep contrast between slow and tribal drums, and some others, sounding like a computer bug; the excellent "Dazed & Confused" transformed skillfully a strange scratch into a loop ; castanets became an acceptable instrument for hip-hop on "Go Back", and a threatening one. Etc.

A seminal record; one of the first tours de force of two indie rap big names; the Canadian equivalent of Funcrusher Plus for its darkness and impact; torn, like it, by its loyalty to hip-hop and its willingness to move beyond: 50/50 Where It Counts was all of these. And today, so many years after it was released, whatever its authors think about it, it still deserves to be viewed as an underground rap classic.