An extended version of the Waterworld LP, released in small numbers in 1999, Masters of the Universe had caused a sensation in hip-hop's underground by 2000. Binary Star's kind of rap, though, was not exactly the boldest or more experimental one, despite some gothic-sounding songs and the duo's integrity. 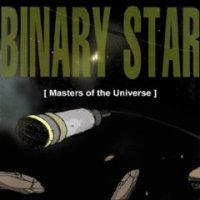 With these two MCs coming from Pontiac, Michigan, we were far from the most extremist fringes of the indie rap scene, those which favored weirdness, or electronic sounds. These rappers' sort of hip-hop was like in the old days, with lots of jazzy beats and words full of street wisdom. One Man Army (aka One Be Lo), Senim Silla and their collaborators, however, were good at selecting clever samples; their lyrics were eloquent and full of burning conviction; and though the album was much too long, it started and it ended well.

As soon as at the very beginning, "Reality Check" was impressive, as well as the upbeat "Conquistador", with its bouncy bass and panting strings, or the previously unreleased "Solar Powered", with scratches from DJ Phrikshun. And though the duo was getting weaker by the middle of the record, it became exciting again with the piano keys of "Indy 5000", an indie hip-hop manifesto, this downtempo "Evolution of Man" they dedicated to ladies, the heartbreaking jazz piano of "I Know why the Cage Birds Sing", a track about prison life, and "Honest Expression", a song about the current state of hip-hop, which sampled some of the genre's classics. Last but not least, the duo closed the album with a thrilling posse cut, a seven minutes long "KGB", delivered on a very unusual sample coming from the Red Army Choir, and introduced by some playlet, with a guy mimicking the slave accent and proposing to play Russian roulette.

Despite this well-received record and some other noticeable releases, especially from One Be Lo, the duo would split quickly and have almost no posterity after Masters of the Universe. The fact is that, instead of exploring new ways, this album was more something of a swansong, the last cry of a kind of rap which didn't want to die, some nostalgic hip-hop that didn't feel comfortable with the new era. And as such, it continues to be praised and revered by some purists.